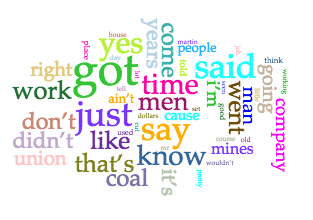 ". . . we had an athletic program here. Our baseball team was as good as any. The Black Barons were known then and we played them twice and they didn’t beat us. We did, we had a third game scheduled, but they didn’t want to be bothered with the miners (laughs) see."

The following is an excerpt of a longer interview with Mr. Kelley and Mr. Simmons. The full transcript for this interview can be accessed in Samford Special Collection.

TCI Services and the Depression

Samuel Kelley describes the difficulties in forming the union and the hardships his father faced as a union man.
Play Segment