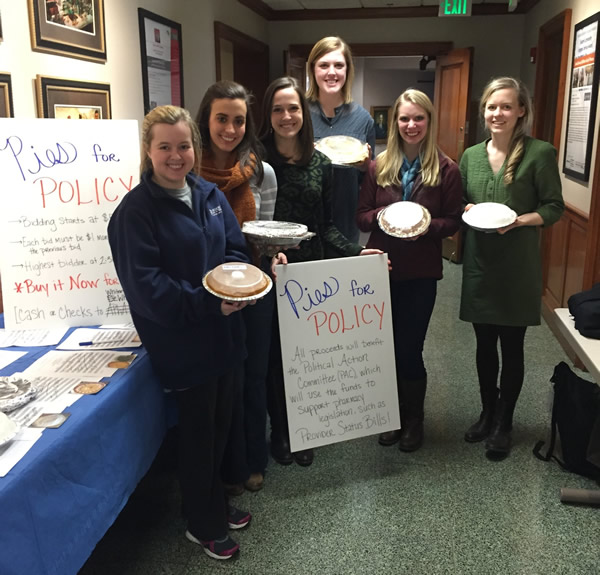 According to pharmacy school dean Michael A. Crouch, provider status will recognize pharmacists as valued members of the health care team, with a focus on expanding the role of the pharmacist and improving the health and wellness of patients served. McWhorter students have written letters to legislators and raised funds to support these advocacy efforts.

Most recently, students made pies and auctioned them off to raise money for APhA’s Political Action Committee fund. According to Jessica Carver, president of the Samford chapter of the APhA Academy of Student Pharmacists (APhA-ASP), Samford’s McWhorter School of Pharmacy has been in the top five schools nationally for lead donors to the PAC fund for the last two years.

Samford’s APhA-ASP chapter has also been participating in a policy postcard challenge. Through the program, patients are provided a postcard on which they are encouraged to write about their experience with a pharmacist after health screenings or counseling; the cards are then mailed to the appropriate state senators and representatives.

“We have always had an engaged student body in the McWhorter School of Pharmacy, and I am pleased to see our students serving as leaders in the APhA Pharmacists Provide Care campaign,” said Crouch.

Pharmacists across the country are uniting behind the provider status cause. The American Pharmacists Association reports that since the Pharmacists Provide Care campaign launched in 2014, more than 10,000 people have signed up on the campaign website at www.PharmacistsProvideCare.com, and more than 100 “Share Your Story” videos have been created by pharmacists from nearly every state talking about how they provide patient care and why their services deserve to be recognized.