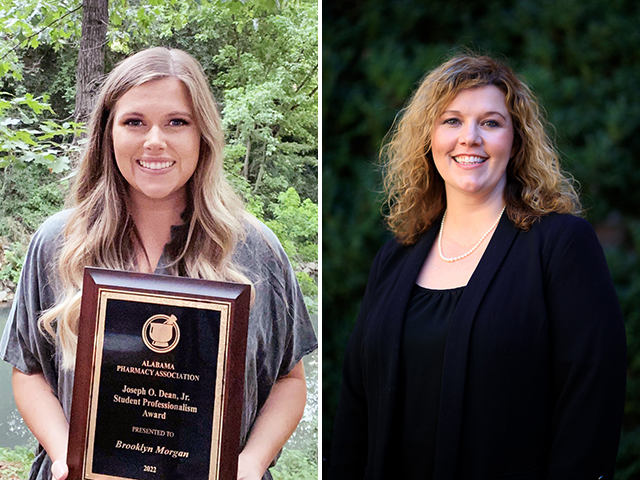 Alumni and faculty from Samford University’s McWhorter School of Pharmacy were recognized and celebrated by their peers at the Alabama Pharmacy Association’s (APA) 141st annual Convention and Trade Show, held June 12-15 in Gulf Shores, Alabama.

According to the APA, the award recognizes student leaders who demonstrate high levels of professionalism in school and other pharmacy-related endeavors. Morgan has been an APA member since 2020 and also serves on the Student Leadership Council of the National Community Pharmacists Association, working to improve student engagement in both organizations.

“We are proud to recognize Brooklyn with this honor,” said Louise Jones, APA chief executive officer. “She is a promising leader, and the profession of pharmacy is lucky to have her.”

Garmon served as president during the 2021-22 term and currently serves on the Alabama Board of Pharmacy.

“APA is proud of our history and the traditions that have been passed down over the 141 years that the association has held annual conventions,” Jones said. “We pride ourselves in being an association that honors our leadership.”

Lastly, the APA celebrated the life and service of the late Samuel Terrell Hardin ’53, inducting him posthumously into the Alabama Pharmacy Hall of Fame.

A decorated World War II veteran, Hardin completed his pharmacy degree from Samford and went into practice as a retail pharmacist and a consultant to a nursing facility and hospital, before transitioning to an administrative position with the Alabama Department of Public Health. There, he helped create the pharmaceutical program for the then-new Alabama Medicaid Agency.

Later, as Alabama Medicaid’s director of pharmaceutical services, he would write prescription policies and procedures to serve as guidelines for the program.

Hardin was active in numerous pharmacy professional organizations and was frequently recognized for his achievements, including a citation from the U.S. Department of Health, Education and Welfare in 1976, being named an Associate Fellow in the American College of Apothecaries in 1987 and receiving the Samford Distinguished Pharmacy Alumnus Award in 1989.