A Heart for A March: DeVries Reveals Connections Between Protest Movements 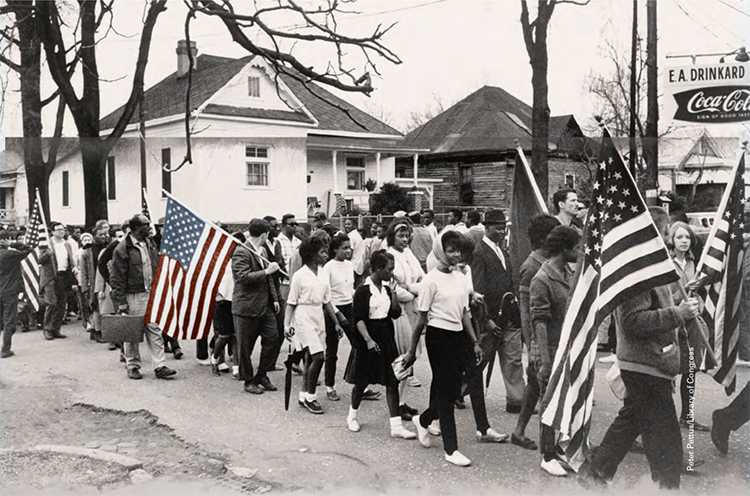 Although protests and marches have dominated U.S. and international media for months, many observers and participants might not be aware of the interconnectedness of protest movements that have reshaped society in the last century. As Samford University prepared for a march for social justice later this month, history professor Annie DeVries provided that important perspective in an online event sponsored by Samford’s Office of Diversity and Intercultural Initiatives. “I see an abiding connection between the events of the 20th century, into the 21st, and I think that gives us some useful context for thinking about our current moment and our students’ desire to march,” DeVries said in her Oct. 6 presentation, A Heart for a March.

“The heart of this conversation, I would say, is addressing a gap between justice and the law,” DeVries observed. “One of the tensions that we’re living through now is that apparent gap. We see that gap in the way that certain laws are upheld or not upheld, and addressing this gap requires specificity, it requires careful thinking and it also requires strategic thinking.”

Historically, that strategic thinking has resulted in high-profile marches that express the grief, frustration and outrage of participants. “Where people have marched before, the march has served as a particularly demonstrative tool for exposing that disconnect between justice and the law, and it is most useful when it is accompanied by a set of clearly defined objectives and, I would argue, a clear sense of what the law is, what it can do and what the goals of justice should be,” DeVries said.

DeVries specializes in the history of the modern Middle East, and was in Egypt during the 2011 protests that seemed to promise an “Arab Spring”. “Seeing those events unfold, I experienced firsthand the profound meaning of political demonstration, the serous risks involved and the political uncertainties it entails,” she said. Arab Spring became Arab Winter, with even greater repression in some areas, partly because “there was no broader apparatus for freedom to attach those revolutionary impulses to,” DeVries said. Earlier movements fared better because they were able to build on existing, if limited, freedoms of press and protest.

DeVries said the Indian “Salt March” led by Mahatma Gandhi in 1930 succeeded in part by using the platform of free British and international media to solicit support from abroad. American clergy were among those who then raised their voices in opposition to the British salt monopoly. “We have to consider the significance of media in being able to hold up an image of injustice for other people to see,” DeVries said. “Without the independent press, the march, in and of itself, is a far less successful and expedient political tool.”

American civil rights leaders absorbed that and other lessons of the Indian movement and applied them to powerful effect in the streets of Selma, Birmingham and Washington, D.C. Media accounts and film of the 1965 “Bloody Sunday” march in Selma were especially important in galvanizing national and international support for the cause of equality and voting rights, DeVries said. Video of the death of George Floyd had a similar effect in the U.S. this summer, forcing national reflection on race and law enforcement and personal responsibility to promote justice. “People refused to be reconciled to that image,” DeVries said.

Although traditional media carried the summer’s images of injustice and protest, they lack some of the authority they enjoyed during the Civil Rights Era. Now, social media spread news faster, with more perspectives and fewer filters. “The volatility of social media is an essential part of the context of what we’re living through right now,” DeVries said. Twitter and other networking services provide instantaneous tracking of events, help leaders organize and allow swift expression of anger that can eventually be harnessed in support of change.

“The anger exists for a reason,” DeVries said. “It’s not wrong to be angry, but we have to try to process it in meaningful, hopeful ways.” For some, that means marching alongside those who share their convictions. “What I see going on with the taking to the streets is that sense of needing to do something, which I think is really important,” DeVries said. Unfortunately, she said, protesters are sometimes met with a defensive “scarcity mindset” that views more freedom for some as meaning less freedom for others. “That justifies a kind of inhumanity,” DeVries said. “What we really need is a better way of talking about how expansive freedom can be when it’s wed to real principles of meaningful justice.”