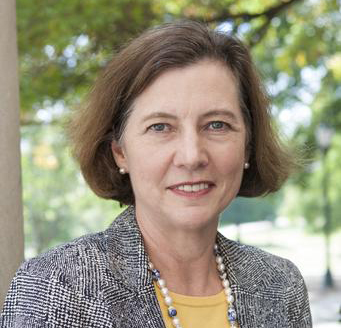 English professor Rosemary Fisk ’77 is retiring from Samford this spring after a total of 40 years on campus, counting her undergraduate study and the teaching that followed. She joined the university’s faculty in 1984 and played key roles in the development of Howard College of Arts and Sciences.

As a teacher and scholar, Fisk has focused on 19th century American literature. She served as president of the Nathaniel Hawthorne Society, published articles on Hawthorne and slave narratives, and organized international conferences in her specialty.  She also co-edited the two-volume Core Texts Reader used in Samford’s Cultural Perspectives classes, and directed the university’s Core Curriculum while serving as associate dean of Howard College Arts and Sciences 2001-2017. She helped former dean David Chapman create the Howard College Advisory Board and organized the Old Howard 100 bike ride that honored Samford’s roots in Marion, Alabama.

For all of her accomplishments at Samford, Fisk said her career highlight was the chance to bring general education reform to universities in Hong Kong via a 2011 J. William Fulbright Foreign Scholarship award. “Now I monitor the future of this liberal arts reform there, and also in Myanmar where I traveled extensively before the recent military crackdown,” she said.

As for teaching at home, Fisk said, “I've loved every class, no two exactly alike.” She said she’ll miss the unique stories of those classes, but suspects that none could ever top the best excuse she heard in her decades at Samford. "Dr. Fisk, I'm so sorry,” a breathless student said upon arriving in class at the end of an exam. “I had to go to Selma to get chicken feathers for the angel wings I'm making for the Shades Mountain Baptist Christmas pageant, and I got lost in Bibb County on the way back!"

“I look forward to being like one of Toni Morrison's characters who just wants to wake up in the morning and ask, ‘What will I do today?’” Fisk said as she reflected on her retirement plans. On some days, she said, the answer will be working with native plants in a woodland back yard with husband Howard Walthall, or walking around the many small Alabama towns they’ve wanted to visit.