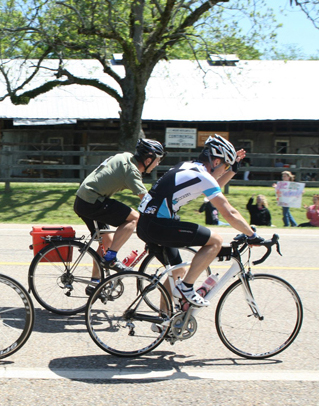 Cyclists Ride in the Old Howard 100

Samford University’s Howard Howard College of Arts and Sciences in August presented the final donation from its annual Old Howard 100 bike ride. The $14,158 raised in this year’s ride will help upgrade technology that provides access to health databases in Perry County. Health-care interns from Samford will continue to use some of these funds for emergency patient care in the region where Samford University was founded as Howard College in 1841.

Over the 12 years the college has organized the Old Howard 100, the ride has raised $57,799 for Sowing Seeds of Hope, a partnership between Perry County and Cooperative Baptist Fellowship that seeks to enhance the quality of work and life in Perry County through improved educational opportunities, health care, tourism, transportation and economic development. Dr. Rosemary Fisk, Howard College of Arts and Sciences associate dean and longtime ride organizer, said the Old Howard 100 collaboration between Samford, Judson College and Sowing Seeds of Hope also highlighted the institutions’ shared histories and missions.

This year, Howard College decided step back from the Old Howard 100 and no longer try to plan the event from a distance. The local leadership team of Sowing Seeds of Hope then indicated a strong wish to take on the organizing role because of what the ride has meant to Perry County, not only in fundraising for health-care initiatives, but in bringing people to the Black Belt, many for the first time.

The Old Howard 100 will continue, but Sowing Seeds of Hope will now organize and host the event that was recently named #2 in the nation on active.com’s ranking of top century rides in the U.S. Fisk said she expects to ride in the 2017 Old Howard 100, set for April 22.