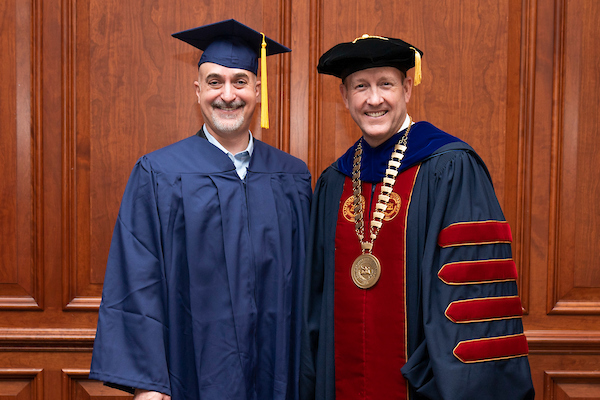 At a glance, David Reeves appears to be about as far as he can be from his rural Alabama roots. Raised in poverty in the Piedmont community, he now lives in Seattle and serves as Vice-President of Application Development and Modernization for 66degrees cloud computing company. He’s also a new graduate of Samford University after a quarter-century pause in his formal education. Returning to Samford’s campus in December, he told a story of reconnection with the university and reconciliation with a younger self who had to make wrenching choices about life.

Reeves knew nothing about Samford as a high school student, but his school librarian, Charlene Glover, encouraged him to apply for the Alabama Governor’s School (AGS,) a statewide academic enrichment program hosted by the university each summer. Accepted to AGS, Reeves got a taste of, and for, life as a Samford student. “I fell in love with the campus, instantly,” Reeves recalled. Attending Samford as a student seemed far beyond his family’s means, but Reeves learned that the top male and female AGS students would be offered the university’s Presidential Scholarship. He aimed to earn that honor, and did. As a Samford student he focused on Spanish language and biology, but with graduation just over the horizon his plans for a career in health care began to fall apart.

In a senior-year medical sociology course, Reeves realized that his values and professional aspirations had changed. “I don’t think I would have been successful in a field where I felt that I couldn’t provide the best care for my patients because of insurance companies dictating quality of care,” he recalled. The trauma of losing both of his grandparent-guardians within a year of each other piled on top of Reeves’ second thoughts, an expired scholarship and the growing burden of grants and loans. He couldn’t carry it all, and didn’t know how to ask for help. “I was 21, and suddenly found myself having to support myself and support my family,” he said. He left Samford.

Interest and ability in computing opened a door for Reeves to work as a software trainer. He then moved into software development, became an engineer and rose to leadership positions in the technology industry, all on the strength of what he could do. He always told the truth when asked about his education, but he feared that his lack of a college degree would eventually become an obstacle to an otherwise exceptional professional trajectory.

“I carried around a tremendous amount of shame for 25 years,” Reeves said. “What it allowed me to do as a leader is be more compassionate and understanding of other peoples’ journey. If they were able to complete their degree, wonderful, that’s great. If not, that’s also okay–it doesn’t necessarily represent your capability. At the same time, what I internalized was completely different. I felt that I was somehow not as good for not having that.”

“I do believe we’re on a journey for a reason, and I don’t regret the past 25 years,” Reeves said. “I’ve been very successful in my career.” Even so, he said his enjoyment of the coaching and mentorship aspects of his work “lit a fire,” and prompted him to think about his Alabama roots, his interrupted education and his personal legacy. As he approached 50, he decided to make some changes. Reviewing the educational options for a new path he realized, “if I’m going to do this, I need to finish that first chapter.”

On a Journey for a Reason

Reeves reached out to Howard College of Arts and Sciences assistant dean Dana Basinger in May, 2020, to see if a degree was still in reach. “This is what I do every day–find somebody who’s about to finish and problem-solve,” Basinger said. She and associate dean Don Bradley went through Reeves’ transcript line-by-line, dug through old course catalogs and found a way to satisfy requirements of the core curriculum established after Reeves left Samford. World Languages and Cultures department chair Grant Henley confirmed that Reeves had already met the requirements for a Spanish major, so Reeves had only to take Biblical Foundations and Concepts of Fitness courses, and complete readings and essays to satisfy the remaining convocation requirements. “I honestly didn’t realize I was so close,” he said. With all of the work and shame behind him in December, Reeves opened his diploma at home, in tears. “Finally having that on my wall allows me to look at things a bit differently,” he said. “I did finish it.”

“I couldn’t be more grateful for all the help that [Basinger] and the rest of the staff gave,” Reeves said. Now he wants to help. Called back to health care by the same values and experience of financial hardship that once turned him away, he will enter a three-year program in mental health counseling focused on social justice. That degree will prepare him to care for people who lack access to mental health counseling. He also hopes to help Samford students who now face the painful choices he faced as a senior. “When I think back to 25 years ago, if I’d just known to ask for help, it was there,” he said on the eve of his long-delayed walk across a stage at Samford. “That influences the communities I want to serve, making sure that there is help available for you, even if you don’t know it’s there.”

The Samford Parents Scholarship now comes to the aid of students like David Reeves, who face unexpected financial hardship in their last year of college. Learn how you can help.