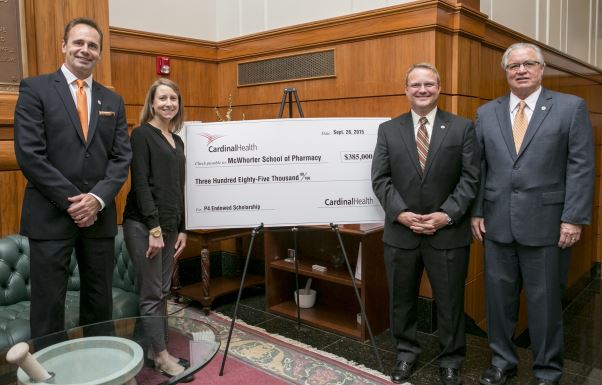 Samford University's McWhorter School of Pharmacy has received a $385,000 gift from Cardinal Health, Inc., of Dublin, Ohio, to fund scholarships for senior pharmacy students preparing to serve in independent pharmacies.

“We are grateful for Cardinal Health’s continued support of students in the McWhorter School of Pharmacy,” said Michael A. Crouch, pharmacy school dean. “Having been around independent pharmacy for a good part of my life, I know first hand the essential role the community pharmacist plays in the healthcare system. These funds are already having an impact and they uniquely support our mission to improve health.”

Nationwide, only ten schools were selected to receive support from Cardinal Health’s Pharmacy Scholarship Program in 2015. According to Cardinal Health, schools are chosen based on their commitment to advancing the independent pharmacy profession. These schools offer curricula focused on operating an independent pharmacy; support student-run chapters of the National Community Pharmacists Association (NCPA); endorse internship and co-op programs with local independent retail pharmacies; and demonstrate high post-graduate placement rates in community pharmacy settings.

"We understand the impact independent pharmacists have on their communities, and the significant role they play in providing cost-effective care that improves patients' health," said Jon Giacomin, chief executive officer of Cardinal Health's Pharmaceutical segment. "Supporting future community pharmacy leaders through this scholarship program is an honor, and we continue to be inspired by the next generation of innovative, patient-focused pharmacy owners as they begin serving their communities."

Independent pharmacies are not directly affiliated with pharmacy chains and are not owned by publicly-traded companies, but are pharmacist-owned and privately-held businesses. They are known for high standards of customer service.

As part of the partnership, Cardinal Health also provides mentoring resources to students holding the scholarship, providing them with practical guidance beyond their scholarship, Dean Crouch noted.

Cardinal Health has donated more than $5 million to more than 28 universities through this program since its launch in June 2011. Cardinal Health, Inc., is a Fortune 500 health care services company that specializes in distribution of pharmaceuticals and medical products, serving more than 100,000 locations.
Samford is a leading Christian university offering undergraduate programs grounded in the liberal arts with an array of nationally recognized graduate and professional schools. Founded in 1841, Samford is the 87th-oldest institution of higher learning in the United States. The Wall Street Journal ranks Samford 1st nationally for student engagement and U.S. News & World Report ranks Samford 66th in the nation for best undergraduate teaching and 104th nationally for best value. Samford enrolls 5,683 students from 47 states and 19 countries in its 10 academic schools: arts, arts and sciences, business, divinity, education, health professions, law, nursing, pharmacy and public health. Samford fields 17 athletic teams that compete in the tradition-rich Southern Conference, and ranks 3rd nationally for its Graduation Success Rate among all NCAA Division I schools.
Marketing and Communication Manager
Frank Ruggiero
fruggier@samford.edu
205-726-4035