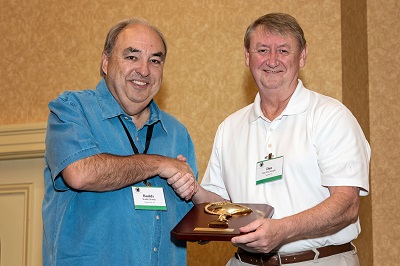 McWhorter School of Pharmacy alumnus Buddy Bunch has received the Alabama Pharmacy Association’s (APA) prestigious Bowl of Hygeia Award in recognition of his outstanding professional contributions to the pharmacy profession. The Bowl of Hygeia Award is considered one of pharmacy’s highest honors and only one pharmacist from each state is selected for the award annually.

“It’s extremely rewarding to see various alumni recognized at the most recent Alabama Pharmacy Association meeting,” said Michael Crouch, dean of the McWhorter School of Pharmacy. “In particular, I’m pleased Buddy was honored for his lifelong service to others and leadership. I can’t think of anyone more deserving of this prestigious award.”

Bunch graduated from McWhorter School of Pharmacy in 1979 and spent 18 years as a store manager for Harco Drug. He opened an independent pharmacy in Guntersville, Alabama in 1997 and continues there today. He has been a member of APA for more than 30 years and has served as vice president and president of the organization. Bunch was appointed to the Alabama State Board of Pharmacy in 2013 and will serve through 2017. He is past-president of the Apple Foundation, a non-profit organization created to supplement the curriculum of the Guntersville public school system with grants for unique educational opportunities. He is currently Chairman of the Board for Guntersville Public Housing and is a member of the First Baptist Church in Guntersville where he is an active deacon.

“Buddy’s compassion for others is evident in everything he does whether it’s for his patients or school children or his church, said Louise Jones, executive director of APA. “He is generous with his time and talents and is one of the most respected pharmacists in the state,” she added.

In addition to this achievement, four other Samford pharmacy alumni were honored at the convention. Joe Dean '62, former dean of McWhorter School of Pharmacy, was inducted into the Alabama Pharmacy Hall of Fame. Charles Woosley ’70, received the Faculty Member of the Year Award; Christy Garmon ’09, received the Cardinal Health Generation Rx Champions Award; and Ginny-Tyler Meadows ’16, received the Student Professionalism award. Awards were presented at the APA’s 135th Annual Convention in Destin, Florida on June 13.

The Alabama Pharmacy Association is a nonprofit professional organization. It is the oldest of the two state pharmacy organizations and has 2,600 members statewide.