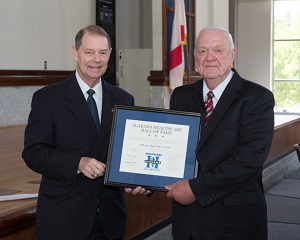 In recognition of his outstanding health care service in the state, M. Lloyd Sellers, a 1965 McWhorter School of Pharmacy alumnus, has been inducted into the Alabama Healthcare Hall of Fame. Sellers’ most notable contribution is his service in the CDC, where he worked with Drs. Jonas Salk and Albert Sabin to help develop the vaccine for Polio. While in pharmacy school he assembled a group of students that administered the oral vaccine in schools.

Following graduation, Sellers was active in the military before opening his pharmacy and practicing as a pharmacist in Opp, Alabama. He is an active member of his community through his service with the Lion’s Club, Chamber of Commerce, Covington Cancer Society and the local school system. Sellers was previously recognized for his service to his community and profession with the Bowl of Hygeia Award, the Alabama Pharmacy Association’s highest honor.

Samford nursing alumnus Frances Ford was also inducted into the 2016 class of the Healthcare Hall of Fame. Ford serves as executive director of Sowing Seeds of Hope, a multi-faceted organization that improve access to quality health care, fosters economic development and provides numerous outreach initiatives to people in Perry County, Alabama. Pharmacy students and faculty frequently work with Ford in service to the community and surrounding areas.

Inductees were honored at a ceremony on July 23 at the Retirement Systems of Alabama Activities Center in Montgomery, Alabama .The Alabama Healthcare Hall of Fame was established in 1997 to recognize persons who have exemplified outstanding healthcare service in the state of Alabama. The physical Hall of Fame can be visited in the atrium of the West Wing at UAB Hospital.