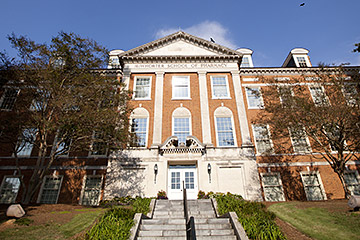 Samford University’s McWhorter School of Pharmacy is ranked among the best in the nation according to rankings released today by U.S. News & World Report.

The pharmacy school moved up nine spots in this year’s Best Pharmacy Schools ranking to number 53 in the country. Pharmacy school rankings are based on the results of peer assessment surveys sent to deans and administrators in accredited schools of pharmacy.

“It’s rewarding to see that our peers so highly regard the quality of our pharmacy program and its graduates,” said pharmacy school dean Michael A. Crouch. “In particular, I’m pleased to see the school ranks so highly in the Southeast and in the top-five of faith-based colleges and schools of pharmacy throughout the country.”

McWhorter School of Pharmacy continues to differentiate itself from its peers by offering numerous dual degree options, including a Pharm.D./M.B.A. and a Pharm.D./M.P.H. and a variety of opportunities for students to personalize their degree to meet their career goals. This year, nearly 20 percent of pharmacy school students will travel internationally and numerous students are engaged in research.

Graduate programs in Samford’s Ida V. Moffett School of Nursing were also ranked. Coming in at number 85 on the Best Graduate Nursing Programs list, Samford’s nursing school is ranked among the top 16 percent of all accredited master’s programs in the country. The school moved up five spots from number 90 last year. Nursing school rankings are based on quality indicators related to student selectivity, faculty resources, faculty achievements, research activity and peer assessments of quality and specialties. The nurse anesthesia concentration was ranked #51 in the nation for the specialty and is the highest ranked program in the state.

“Samford’s recognition by U.S. News & World Report attests to the value of a Samford education and the success of our graduates and faculty,” said Samford provost J. Michael Hardin. “We are proud of the work taking place within the schools of nursing and pharmacy and applaud the faculty, administration and students for earning such a strong reputation among their peers.”

“The latest rankings are a strong testament to the strength of our programs in the College of Health Sciences,” said Nena F. Sanders, Vice Provost of the College of Health Sciences. “To be recognized as a national leader in nursing and pharmacy education is a strong affirmation of the tremendous work of our faculty and administration in these schools.”

According to Sanders, Samford’s health sciences programs are designed to meet the needs of not only students and graduates, but also the respective professions and the overall health care community. Both the nursing and pharmacy school have recently experienced growth in their graduate programs.