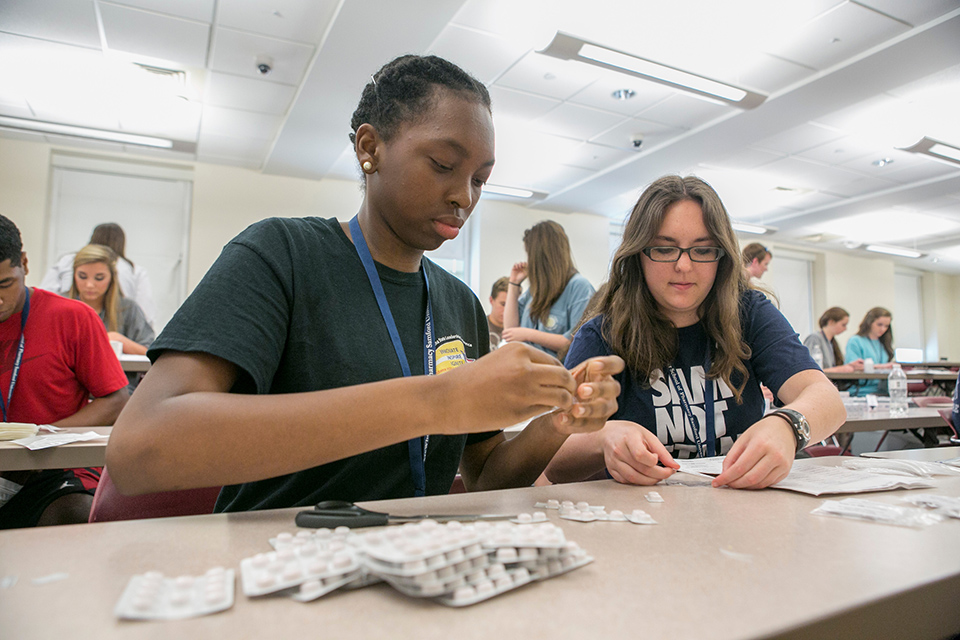 Though the camp is in its fifth year, it took place for the first time in Samford’s College of Health Sciences, the new home of McWhorter School of Pharmacy.

Attendees conducted labs in our new state-of-the-art facilities as well as traveled throughout the community to different pharmacy sites, giving them a realistic perspective of both the field of pharmacy and Samford’s distinctive Doctor of Pharmacy program.

Eli Shunnarah, a camp attendee from Vestavia, Alabama said, “Compounding was the most interesting activity for me. You always picture pharmacists putting pills in bottles, but getting to actually make the medicine is a whole different experience.”

While no real medicine was involved, attendees compounded fake oral medicines, made creams and balms, and even learned how to make gummy bears (a camp favorite).

Along with activities on campus, attendees participated in site visits to retail pharmacies, nuclear pharmacies, hospital pharmacies and others where they are able to visualize themselves in a variety of roles.

Keri Morris, a camp attendee from Kodiak, Arkansas visited a pharmacy at Children’s of Alabama. “Children’s was my favorite because I didn’t originally think I wanted to go into pediatric pharmacy,” Morris said. “After going and seeing what they did it helped me realize that pediatrics is something I’m interested in.”

Jacob Hopkins, a camp attendee from Tupelo, Mississippi, said, “My favorite site visit was the retail pharmacy, because that is where I see myself most. It was like a peek into the future of what I will be doing one day.”

Many of pharmacy sites they visited were associated with McWhorter School of Pharmacy alumni, and the camp was led by current students and faculty.

At the conclusion of the camp, attendees had gained greater knowledge about the field of pharmacy as well as a refined vision for which area of pharmacy they might want to pursue. Many of those in attendance will begin their freshman year at Samford in the fall.

Olivia Halverson is a journalism and mass communication major and a news and feature writer in the College of Health Sciences.