McWhorter School of Pharmacy honored its class of 2023 at its annual white coat ceremony, Oct. 11, at Shades Mountain Baptist Church. The ceremony welcomed the school’s first-year Doctor of Pharmacy students to the profession of pharmacy, and it represents the first of many steps along the way to becoming a licensed pharmacist.

“We intentionally delay our white coat ceremony, hosting it in October in collaboration with American Pharmacists Month,” Crouch explained. “But this delay also gives students time to discuss what the white coat represents and the obligations associated with it. We ask students to consider their professional identity, and how their white coat contributes to it.”

During the ceremony, students are presented with their white coats and are asked to recite the American Pharmacists Association’s Pledge of Professionalism. Students are presented their white coats by the dean and a pharmacist, faculty member or pharmacy student of their choice. Coaters included numerous McWhorter School of Pharmacy alumni, as well as parents, siblings, employers and other professional and student mentors.

Lieutenant Commander Nicholas Daniel ’14, served as the ceremony’s keynote speaker. Commissioned in the United States Public Health Service, Daniel is currently stationed in the Office of Generic Drugs with the Food and Drug Administration. He serves as the regulatory project manager, managing the review process for approximately 60 concurrent generic drug applications. 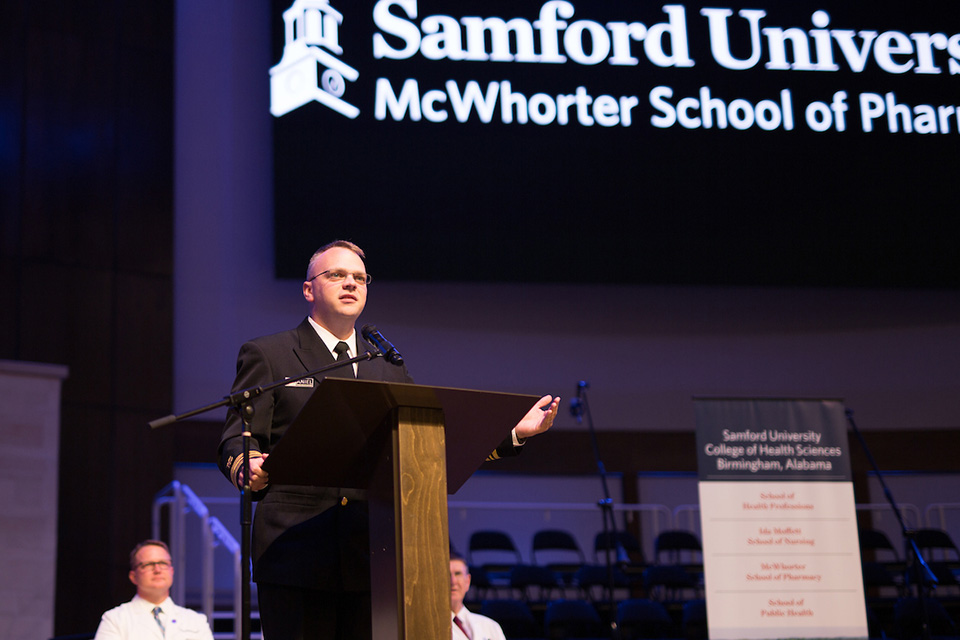 In his remarks to students, Daniel encouraged them to take ownership of their pharmacy school experience. “What you put into your education will be directly proportionate to what you receive,” he said, citing the importance of getting involved in the many student organizations McWhorter School of Pharmacy has to offer.

“Don’t just be a member; be willing to truly serve an organization. In four-years’ time, these will be the experiences that will differentiate you from others applying for the same jobs,” Daniel said. “When I’m conducting interviews at the FDA, I’m looking to see if the candidate can identify a problem, seek out a solution, and implement it.”

Daniel also spoke to the important roles pharmacists play—from being the drug expert on a health care team to serving as a public health professional. “Yet most importantly, pharmacists are patient advocates. Every time you talk to a patient, you should be listening to what they are saying and how they are describing their circumstances. Very often, they are describing an experience that they don’t know is related to their medications, and as pharmacists, we can fix that.”

In August, the 127-member class began the school’s four-year professional curriculum that leads to a Doctor of Pharmacy. Students completed two or more years of undergraduate course work prior to entering pharmacy school.