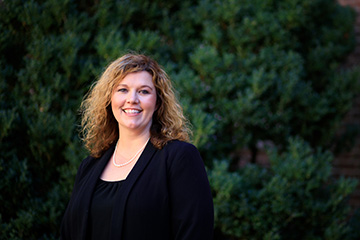 Christy Garmon ’09 is the latest alumna of Samford University’s McWhorter School of Pharmacy to join the Alabama State Board of Pharmacy. In accepting her appointment from Governor Kay Ivey, she joins fellow alumni Brenda Denson ’94 and Rob Colburn ’84 on the five-member board.

Garmon will be representing chain pharmacy, bringing over 15 years of experience from her pharmacy career with CVS Health. Currently, she works as a CVS District Leader in South Alabama and Mississippi markets.

This is not Garmon’s first leadership role within the pharmacy profession in Alabama. She has served with various boards and organizations including the Alabama Department of Public Health’s Office of Women’s Health as well as McWhorter School of Pharmacy’s admission committee and advisory board.  She also currently serves as the vice president of the Alabama Pharmacy Association.

“Joining the Alabama Board of Pharmacy is a great honor, but also a great responsibility. My work on the board begins during a critical time for health care and particularly pharmacy in this state. Changes in our industry and practice are coming sometimes at lightning speeds, and it is our job to ensure that those changes are in the best interest of patient care,” she said.

This mindset is something Garmon says was instilled in her from the first day of pharmacy school. “Dean Joseph O. Dean welcomed us with a message: ‘Pharmacy in Alabama is a legislative act that can be changed with a stroke of a pen.’ From that day forward, being an advocate for how those pen strokes can affect patient care has been a core value in who I am as a pharmacist,” she said.

The Alabama State Board of Pharmacy is among the highest honors a pharmacist can receive on the state-level. The board is vested with the authority to carry out the Pharmacy Practice Act, which gives them authority to regulate the practice of pharmacy and the management and operations of pharmacies—as to protect the health, safety, and welfare of the people of Alabama.

Along with the three alumni who serve as members of the Alabama State of Board of Pharmacy, alumna Donna Yeatman ’94 also serves the board as its executive secretary.