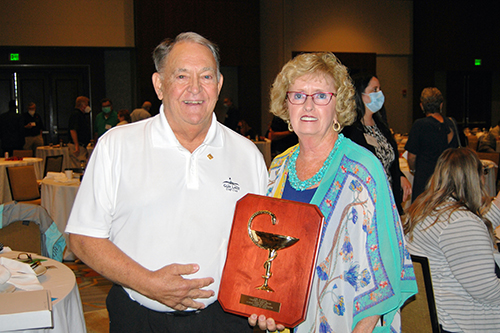 Alumni and current students of Samford University’s McWhorter School of Pharmacy were recognized and honored during the Alabama Pharmacy Association’s 139th Annual Meeting and Awards Luncheon at the end of August.

Most notably, alumnus Barry Rich ’70 was the recipient of the organization’s Bowl of Hygeia Award, which is considered one of pharmacy’s highest honors. It is presented annually by participating pharmacy associations in each of the fifty states, the District of Columbia, and Puerto Rico, and the recipients are selected for their outstanding record of community service and have distinguished themselves through their actions.

“Pharmacists are naturally servant-hearted but Barry Rich takes that to a whole new level,” said Louise Jones, APA chief executive officer. “His service to those in need is tremendous and he truly makes you want to be a better person. We are incredibly proud to recognize his work with this award.”

In addition, Lynda Ewen ’66 and Roy Barnett ‘60 was inducted into the Alabama Pharmacy Hall of Fame, honoring them for their outstanding contributions and exemplary service to pharmacy and health care over the course of their careers.

Steve Gifford, ’90 was named the 2020 recipient of the Lester White Good Government Award. Established in 2000, this award recognizes individuals who actively contribute to the community through their involvement in the political process.

“Many pharmacists unfortunately don’t understand how politics is important to their practice. Steve Gifford engages on every level and works to ensure lawmakers are educated on the issues impacting pharmacy. He is incredibly deserving of this recognition,” Jones said.

And Frank Reynolds ’60 was named the recipient of the APA Advocate Award. This annual award recognizes members who are strong advocates for APA and consistently participate in its programs, events, and activities.

Finally, APA presented Erin Willis Creasy ‘20 and current fourth-year Doctor of Pharmacy student, Ryan Oakley, with the Joseph O. Dean, Jr. Student Professionalism Award. This award is presented annually to a Samford student or recent alum who is an APA member, recognizing them as a student leader who demonstrates a high level of professionalism in school and other pharmacy-related endeavors.
Samford is a leading Christian university offering undergraduate programs grounded in the liberal arts with an array of nationally recognized graduate and professional schools. Founded in 1841, Samford is the 87th-oldest institution of higher learning in the United States. The Wall Street Journal ranks Samford 1st nationally for student engagement and U.S. News & World Report ranks Samford 66th in the nation for best undergraduate teaching and 104th nationally for best value. Samford enrolls 5,683 students from 47 states and 19 countries in its 10 academic schools: arts, arts and sciences, business, divinity, education, health professions, law, nursing, pharmacy and public health. Samford fields 17 athletic teams that compete in the tradition-rich Southern Conference, and ranks 6th nationally for its Graduation Success Rate among all NCAA Division I schools.
Marketing and Communication Manager
Frank Ruggiero
fruggier@samford.edu
205-726-4035