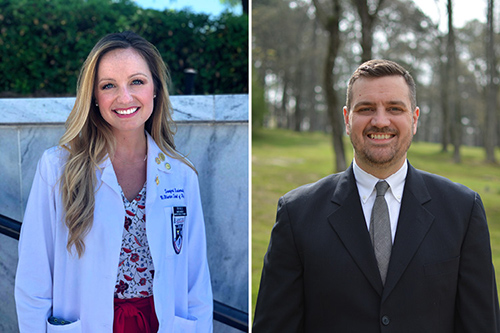 Samford University’s McWhorter School of Pharmacy honored 239 graduates, August 15, through a virtual commencement ceremony. Of these graduates, 95 received their Doctor of Pharmacy, and 114 received their B.S. in pharmacy studies, which is awarded upon the completion of their second year of pharmacy school.

Though virtual, the ceremony upheld the traditional structure of commencement, which includes two graduate speakers. Representing their classes, these speakers included Erin Creasy ’20, Doctor of Pharmacy, and David Singleton ’20, B.S. in pharmacy studies. Both shared words of advice for the future, citing scripture as the instruction for how each of us should live.

Singleton shared his favorite scripture, Ephesians 4:32, “Be kind to one another.”

“We were called to the field of pharmacy out of a desire to help others. We see a need…. Those who are called to health care respond to that need and take initiative to do what this verse says, by showing kindness to them,” he said. “Given the pandemic we’ve experienced, this is more important than ever.”

Creasy recalled the story she shared with her classmates during finals weeks of their first year of pharmacy school. “It was the story of David and Goliath. I shared with you how the Lord called David, a young shepherd boy, to face Goliath, the Philistine, a champion giant,” she said.

For Creasy, pharmacy school sometimes felt like she was facing her own Goliath, but in these moments, she explained, it’s important to remember the end of the story—with David shocking the crowd and standing victorious over his rival.

“He knew his fate did not lie in his own hands, but rather in the hands of God,” Creasy said. “While at times, we all had our doubts and our faith was tested. It was Christ who saw us through to this very day. As much as I would like to say that pharmacy school will be the biggest giant we will ever face, we all know that there is no truth in those words.”

“As we begin our careers as pharmacists, we find ourselves charging onto the field in the most uncertain of times. I want to urge each of you to diligently seek the Lord each and every day, and to ask him to prepare you to face the giants of life that lie ahead,” she said.

Following the speakers’ remarks, the ceremony continued with the reading of each graduates’ name as well as words of encouragement from University President Andrew Westmoreland.

“Class of 2020, you are now well on your way to the challenges and opportunities of an abundant life. We hope your journey will lead you back to us soon and often,” he said. “May you remember that on a hillside of Alabama, there are people who will recall your name years from now with proud memories. We’ve given you our best. Now into a broken, beautiful world—a world of strife and hope and promise, in need of healing—use what you gained here and multiply it hundred-fold. May God bless each step, each day.”