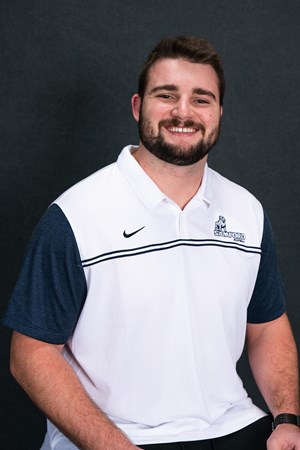 For Gavin Orr, the spring semester pushed him to achieve a new level of multitasking. Not only was he a first-year Doctor of Pharmacy student in Samford University’s McWhorter School of Pharmacy, but he also played offensive lineman on the university’s football team.

Throughout the season, which was postponed to the spring due to COVID-19, Orr spent his days in class, afternoons at football practice and evenings on campus studying. " I could really only study after 7 or 8 p.m. when I got back from practice," he said. "A classmate and I would go to the College of Health Sciences just about every night to study."

Orr, a native of Gadsden, Alabama, was recruited by Samford to play football while in high school.

"I ended up with multiple scholarship offers, but Samford made me an offer early in the recruitment stage," Orr said. "I fell in love with Samford. The coaches were great, and I knew it was a great school."

Orr was excited about being close to home and decided to commit to playing for the university. During his senior year of high school, he started to think about his future and what he wanted to study. He originally thought about engineering, but it was a chemistry teacher who inspired him to look into pharmacy.

"I knew Samford had a pharmacy program, and that nowhere else had what I was looking," Orr said. "I looked further into it, and I decided to go down that path."

Orr entered Samford as a freshman, pursing the university’s prepharmacy curriculum. This two-year program set Orr on the path to complete all courses required for pharmacy school before his junior year. At the end of this sophomore year, he applied and was accepted to McWhorter School of Pharmacy’s Doctor of Pharmacy program. Now, as Orr prepares to start his second year of pharmacy school this fall, he is still considered a senior on the football field.

It is rare that a student-athlete pursues this course of study—college athletics and pharmacy school can be very demanding on one’s time and energy. But Orr said he has been able to pursue both because of the support he has received at Samford.

"The football team always makes sure I stay on track, and they are there for me if I need anything," Orr said. "Pharmacy school… they are there the same way. If I need any support, they give it. They've been really great to me."

Orr said he feels very prepared and confident in his course work as he continues to balance sports and pharmacy school. When he graduates, he hopes to move back to Gadsden. "I hope to start working in a local pharmacy in my hometown, and then, after working for a while, I would love to one day own a pharmacy there," Orr said.

Read more about Orr’s success on the football field at samfordports.com
Samford is a leading Christian university offering undergraduate programs grounded in the liberal arts with an array of nationally recognized graduate and professional schools. Founded in 1841, Samford is the 87th-oldest institution of higher learning in the United States. The Wall Street Journal ranks Samford 1st nationally for student engagement and U.S. News & World Report ranks Samford 66th in the nation for best undergraduate teaching and 104th nationally for best value. Samford enrolls 5,683 students from 47 states and 19 countries in its 10 academic schools: arts, arts and sciences, business, divinity, education, health professions, law, nursing, pharmacy and public health. Samford fields 17 athletic teams that compete in the tradition-rich Southern Conference, and ranks 6th nationally for its Graduation Success Rate among all NCAA Division I schools.
Marketing and Communication Manager
Frank Ruggiero
fruggier@samford.edu
205-726-4035