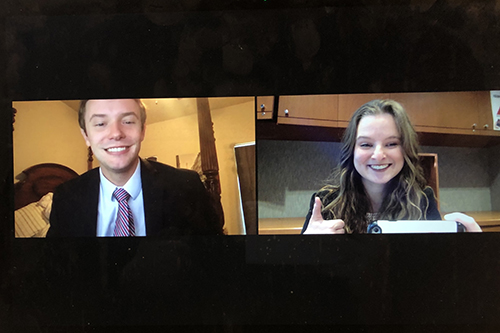 Competing against 139 teams from pharmacy schools across the country, Walters and Boone excelled, finishing in third place. “When we found out that we were finalists I honestly couldn’t believe it,” Walters said. “We felt confident in our performance, but we knew our competition was tough. Finding out that we came in third place was just icing on the cake.”

This year’s clinical case revolved around a patient with septic shock secondary to hospital-acquired pneumonia. From the time they were presented with the information, Walters and Boone had only two hours to develop their care plan.

“The most challenging aspect of working through the case was time management. There are quite a few problems in the case that must be thoroughly addressed in just two hours,” Walters said. “Logan and I overcame this issue by dividing and conquering the case. Before the competition, we worked a few practice cases to develop our strategy. During the competition, we worked together on the primary problem, but we trusted each other to independently address the secondary problems. Near the end of the competition, we did a quick debrief of both of our plans for the secondary problems and added information if necessary. We definitely would not have been able to accomplish this without teamwork and trust.”

This was not the first time Walters and Boone had competed together as a team. Last year, they placed second in the local round of competition, hosted by Samford. “Part of our motivation to compete again was to see if we could beat ourselves and advance to the national round. Another part of our motivation was to better hone our clinical skills,” Walters said.

About 50 McWhorter School of Pharmacy students participate in the local clinical skills competition each year, and like Walters and Boone, they find that the competition not only tests their knowledge, but it also supports their development of skills like critical thinking, problem-solving and communication.

“During the competition, you essentially do what is expected of you on clinical rotations,” Walters said. “Logan and I felt confident while working up our patient. This confidence would not have been possible without the excellent didactic instruction from our professors and experiential instruction from our preceptors.”

A Repeat of History

This is not the first time McWhorter School of Pharmacy students finished in the top three of ASHP’s national clinical skills competition. In 2018, Brandon Powell ’19 and Will Hammonds ’19 finished second.