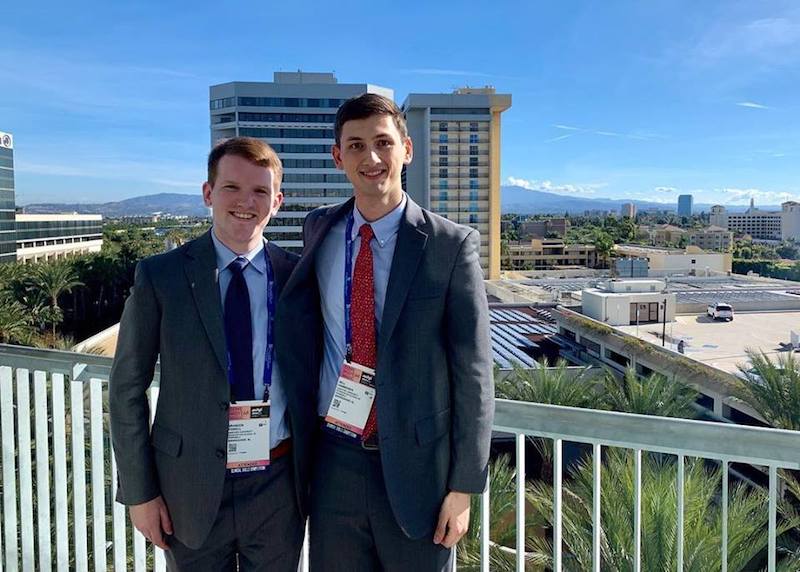 “As pharmacy students, we can select the right medication to give a patient, but what made this competition difficult is it required us to compose a comprehensive care plan for the patient,” said Will Hammonds, a fourth-year student in Samford's McWhorter School of Pharmacy. “But then, I think that’s what made our team stand out. We went in with the mindset, how can we make this person—as a whole—better.”

Hammonds and Brandon Powell, a fellow fourth-year pharmacy student, put their clinical skills to the test when they competed in the American Society of Health-System Pharmacists’ (ASHP) national Clinical Skills Competition in Anaheim, California.

After winning their local competition in Birmingham, the duo competed against 138 other teams from pharmacy schools across the country at the annual ASHP Midyear Clinical Meeting. When the competition results were announced, the contingent of Samford faculty, alumni and students in attendance leapt to their feet when they heard Hammonds and Powell placed second.

“We’re all trained to know how to look up guidelines and answer difficult clinical cases, but with this competition, you add the element of being pressed for time,” Hammonds said.

During the competition, Hammonds and Powell had two hours to research information and compose a pharmacist care plan, which involved determining the patient’s primary problem, acute problems and issues that could arise during discharge and follow up.

The clinical case in the national competition revolved around a patient with HIV. While Hammonds and Powell have gained real-world experience in clinical pharmacy through their advanced pharmacy practice experiences, “neither Brandon nor I have had a rotation that gave us management experience specifically with HIV,” Hammonds said. “But we were able to rely on other knowledge and clinical experiences as well as the resources provided to do well in the competition.”

Hammonds also credits McWhorter School of Pharmacy’s commitment to interprofessional education for giving them a leg up in the competition. “

We experience interprofessional teams on our clinical rotations, but the fact that we had this experience early in the curriculum really helped,” he said.

Powell echoed Hammonds’ sentiment. “I’ll confess, I didn’t realize what some professionals, like social workers, did until we started incorporating interprofessional learning into the curriculum,” he said.

“Being aware of the general role that they play in the care of a patient has been invaluable.”