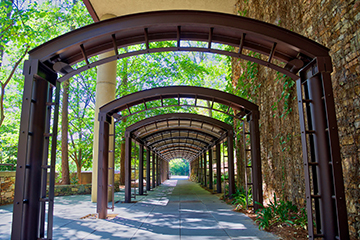 Samford University’s McWhorter School of Pharmacy established its Underrepresented Minority Student Scholarship in 2016, and earlier this year, the scholarship reached its endowment level, ensuring it will continue to impact students’ lives for generations to come.

Through the generosity of more than 50 donors, including alumni, employees and friends, the scholarship is awarded to a student who is enrolled in the school’s Doctor of Pharmacy program. Selection preference is given to students who are from the state of Alabama, exhibit a record of service to the community and demonstrate a financial need.

“When we established this scholarship, it was created alongside a commitment to increase diversity among our students,” said Michael Crouch, dean of McWhorter School of Pharmacy and associate provost for Samford’s College of Health Sciences. “A representative class benefits all students by including broader perspectives and experiences, making them more empathetic, open-minded, and ready for the inclusive world where they will practice. Each donor who gave to this fund joined us in that commitment for which I am incredibly thankful.”

In fall 2021, McWhorter School of Pharmacy announced its incoming class of first-year students was the most diverse in the school’s history with 44% of new students comprised of historically underrepresented racial groups.

Contributions to McWhorter School of Pharmacy’s Underrepresented Minority Student Scholarship can still be made. Make your gift at samford.edu/pharmacy/giving.