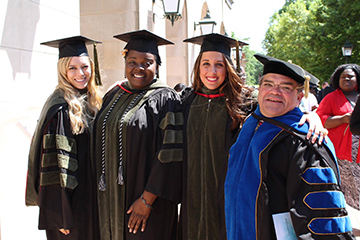 This story originally ran in the Summer 2019 issue of Samford University's Seasons magazine.

Mention the name Gary Bumgarner to McWhorter School of Pharmacy alumni or employees, and you’ll see a smile immediately come to their faces. The stories naturally come next. “He had such a positive attitude,” said professor Bruce Waldrop. “Even in the adversity he faced, he always said he was going to come back stronger than ever.”

“He had a deep love for his students,” said professor Amy Broeseker. “There were many times when Gary went above and beyond the call.”

Bumgarner served on McWhorter School of Pharmacy’s faculty from 2001 until his death in 2016, and though the school’s class of 2019 was the last cohort of students to experience Bumgarner in the classroom, his legacy will continue for years to come.

Following his death, the school established the Dr. Gary Bumgarner Legacy Scholarship, and after receiving an outpouring of gifts from students, alumni, co-workers and friends, the scholarship became fully endowed earlier this year. As an endowed scholarship, the Dr. Gary Bumgarner Legacy Scholarship will now exist in perpetuity, ensuring his impact will last forever.

The school first awarded the scholarship in 2017 to Theresa El-Murr ’19. In her first year of pharmacy school, Bumgarner taught El-Murr’s immunology course. “He really inspired me to pursue opportunities in research,” she said. “His passion for teaching was clearly evident when you talked to him. I remember telling him about areas of pharmacy I wanted to learn more about, and he always replied, ‘Do it. Don’t let anything stop you from learning more.’”

In the summer after her first year, El-Murr participated in the school’s summer research internship, working alongside Bumgarner. “He was one of the most positive people that I knew. Even to this day, in tough situations, I sometimes think to myself: What would Dr. Bumgarner do?”

During his time as a Samford professor, Bumgarner impacted the lives of nearly 2,000 pharmacy students and countless others.

“Dr. Bumgarner actually came up in one of my interviews for a pharmacy residency program,” El-Murr said. “My interviewer saw his name on my resume, and having known him, shared with me how Dr. Bumgarner impacted his life. It’s incredible to think how far his legacy reaches.”

“Samford and the world are better because of Gary Bumgarner,” said Michael Crouch, dean of McWhorter School of Pharmacy. “I’m so pleased the scholarship is fully endowed, and his legacy will co­­ntinue to impact the lives of our students for years to come.”