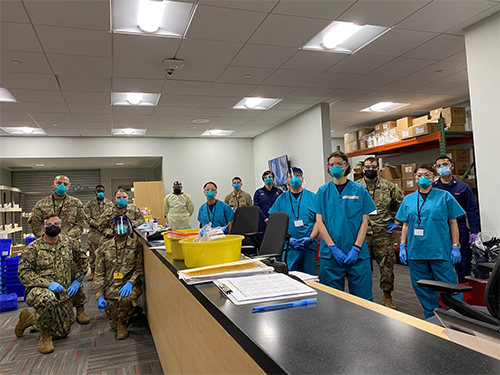 Nicholas Daniel, a 2014 alumnus of Samford University’s McWhorter School of Pharmacy, has worked for the U.S. Food and Drug Administration (FDA) in the Office of Generic Drugs for roughly three years. But as a pharmacist and Lieutenant Commander in the U.S. Public Health Service Commissioned Corps, his work is far from the average desk job.

Daniel is stationed at the FDA, but periodically, he is deployed to serve in response to a disaster or health crisis in a U.S. city or community. In late February, when it was becoming apparent that COVID-19 would reach the United States, Daniel knew that we would need to serve once again.

On March 27, Daniel packed his bags and drove from D.C. to New York City. His deployment, which included 68 other U.S. Public Health Service officers, would station him at the Javits Convention Center in Manhattan. When he arrived, he was shown an empty room. “They said, this is your pharmacy, and we start accepting patients on Monday,” Daniel recalled.

Sure enough, within a matter of days, the U.S. Public Health Service and members of the U.S. Army transformed the center’s large meeting hall into a medical treatment center, complete with more than 500 hospital beds.

“In times of crisis, a city’s hospitals become compressed. They are tight on bed space, and their staffing is limited. We come and provide decompression by alleviating some of those beds. Normally, we care for the low acuity patients, making it possible for the hospitals to accept higher acuity patients,” Daniel said. “This is our typical deployment. We did something similar in New York… just way more intense.”

Initially, the mission of the medical treatment center was to care for COVID-negative patients, but on the third day—with the number of cases growing exponentially—the decision was made that the center would start taking COVID-positive patients. “It was then that the flood gates opened,” Daniel said. “I think the most patients we admitted in a single day was 200, which is a very busy day.”

Daniel and his fellow officers in the U.S. Public Health Service served alongside members of the U.S. Army, Army Reserves and Navy Reserves to care for the patients they admitted. While the center’s operations were similar in structure to others Daniel had experienced, he said it was interesting to collaborate with the Army personnel who had a different background.

“Typically, the Army’s medical staff is deployed to places like Afghanistan and Iraq to take care of trauma patients. They aren’t accustomed to working with certain professions, like social workers, or managing insurance,” he said. “But with the combination of our different experiences, we were able to develop a rhythm that served us well.”

For four weeks, Daniel worked 12-hour shifts, from 7 a.m. to 7 p.m. But one evening, toward the end of his deployment, he was able to leave early and experience New York’s “Clap Because We Care” movement.

Walking to dinner, Daniel said all of sudden he could hear the cheers of a large crowd with bells and whistles. “I thought to myself, ‘Is there a race going on here?' It wasn’t until we were in the middle of it—surrounded by people hanging out their windows—that it occurred to me, this is for us,” he said. “It was incredibly moving.”

On the day Daniel left New York City in April, the U.S. Public Health Service wanted to reciprocate the response. “Right before we left, we put up these huge signs that said, ‘Stay Strong, New York City,’ and we went and clapped for them,” he said.

Following a two-week quarantine period, Daniel returned to the FDA, where COVID-19 continued to impact his daily work, just in a different way. But his time in New York provided him a unique perspective of what it takes to care for patients in the midst of pandemic.

In October 2019, Nicholas Daniel addressed current Doctor of Pharmacy students as the keynote speaker for the Class of 2023's White Coat Ceremony. In his speech, he spoke about the important roles pharmacists play—from being the drug expert on a health care team to serving as a public health professional. Read more