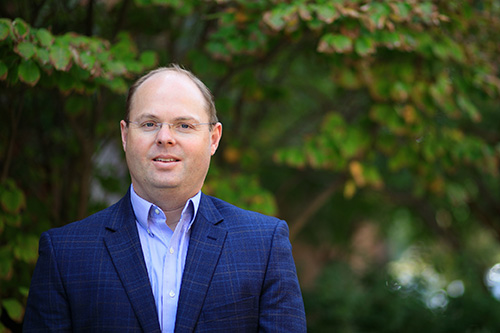 P.J. Hughes, assistant provost for faculty success and professor of pharmacy in Samford University’s McWhorter School of Pharmacy, had the opportunity to serve as an author of the 2022 National Standards for Diabetes Self-Management Education and Support (DSMES), a document that sets national standards for diabetes education for patients who are newly diagnosed or face diabetes-related complications. These national standards are used in benchmarking health care practice sites for the purposes of initial and continued national accreditation.

Hughes was one of two pharmacists in the writing group, representing the needs of independent community pharmacies in rural locations. He gained this perspective through his ongoing involvement in DSMES training in Alabama, led by McWhorter School of Pharmacy.

The school’s training program was established and maintained through DSMES grants from the Alabama Department of Public Health via funding from the CDC. McWhorter School of Pharmacy was awarded the first grant in 2016, receiving $40,000 for two years. Later, in 2018, the school received a second grant totaling more than $500,000 for five years.

“The focus of the grant is to administer educational services and professional training to health care providers whose practice sites can become accredited in DSMES, which is a reimbursable service offering. In the first two years, we focused this training on pharmacists and pharmacies, but when we received the larger grant in 2018, we partnered with our colleagues in Samford’s School of Public Health to expand the training to include both pharmacists and registered dietitians and their respective practice sites,” Hughes said.

Samford is the only institution in Alabama to receive these funds, which the CDC provided to the Alabama Department of Public Health to distribute as they see fit. And as a result, the university is the only Alabama-based provider of DEMES training in the state.

“Through this grant, we train pharmacists and dietitians to administer diabetes education services to people who are recently diagnosed with diabetes or who have had a diabetes-related complication arise… to teach their patients how to manage their condition,” Hughes said. “We focus a lot on self-care behaviors, like eating better, taking medications as prescribed, having positive mental health and engaging in physical activity.”

Hughes considered it an honor to serve on the writing group for the 2022 national standards. “It was an incredible experience to be involved in updating the guiding document that I have used for numerous years and to represent the pharmacists and dietitians who I know make a meaningful impact in the lives of the people in their communities,” he said.

While Hughes is no longer the primary investigator on the DSME grants Samford receives, he continues to remain involved, working alongside Stephen Brown, assistant professor in McWhorter School of Pharmacy and the current lead investigator, and Keith Pearson and Megan Kaal, faculty in the School of Public Health.