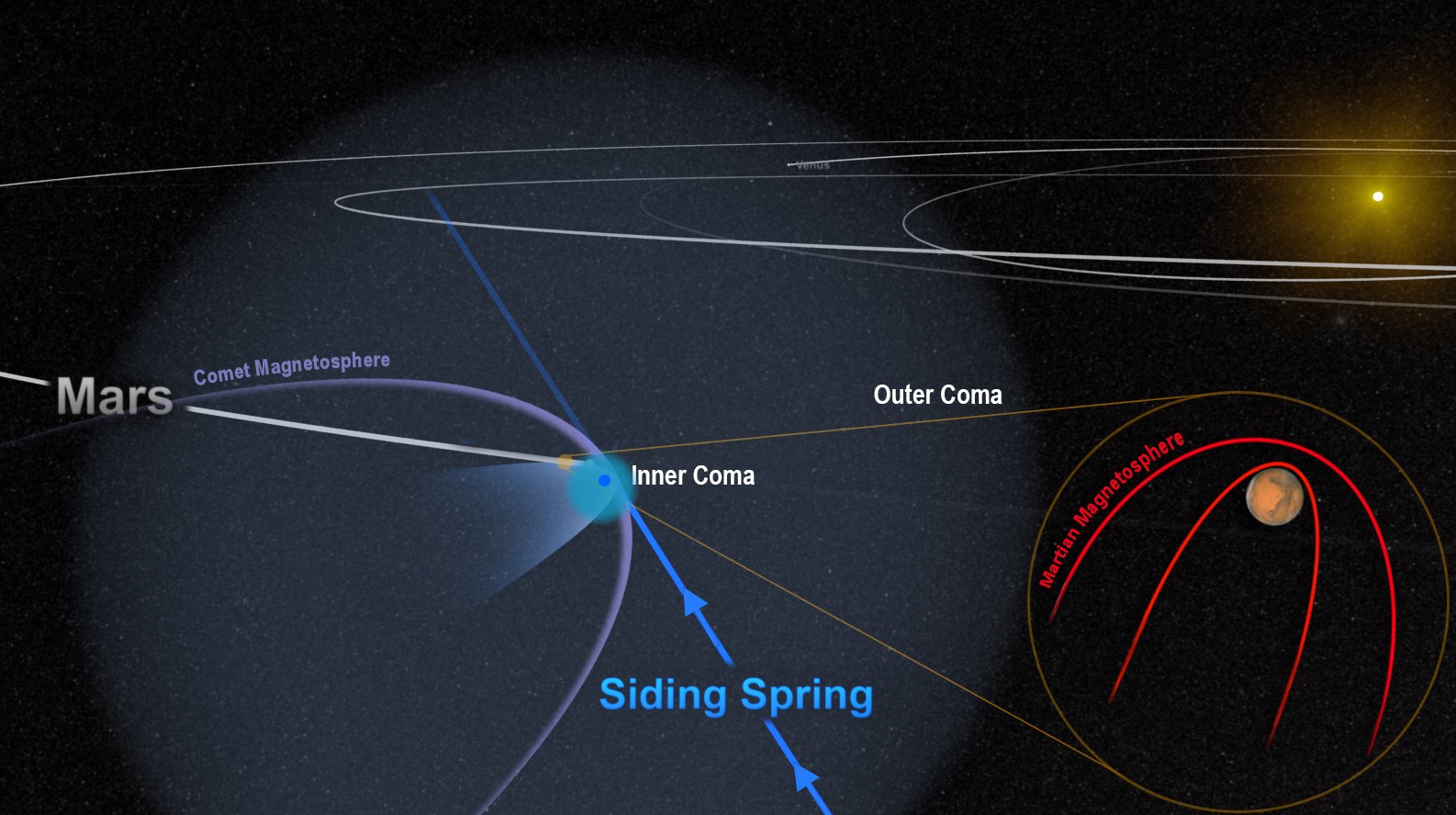 Weeks before the noteworthy encounter of comet “Siding Spring” (C/2013 A1) and Mars in October 2014, NASA’s MAVEN spacecraft began orbiting around the Red Planet. The comet came into the inner solar system straight from the Oort Cloud. To protect sensitive equipment aboard MAVEN from potential harm, some instruments were turned off during the flyby. However, select equipment remained on, including MAVEN’s magnetometer. “MAVEN” stands for Mars Atmosphere and Volatile Evolution spacecraft. The magnetometer carried out close observations during the comet’s remarkably close fly by. This one-of-a-kind opportunity provided scientists with an intimate view of comet’s temporary, but profound effect on the magnetic environment, or magnetosphere—the abrupt chaos of the comet’s flyby on Mars.

Mars was flooded with an invisible tide of charged particles from the comet’s coma—the envelope of gas flooding from a comet’s nucleus. Jared Espley, a MAVEN science team member at NASA in Maryland stated, “We think the encounter blew away part of Mars’ upper atmosphere, much like a strong storm would.”

How did this happen? Unlike Earth, Mars is not shielded with a strong magnetosphere created within the planet. Mars’ atmosphere offers much less protection, however, some by redirecting the solar wind around the planet—similar to how water flows around a rock in a stream. This occurs because at very high altitudes, Mars is composed of plasma—a layer of electrically charged particles and gas molecules. The charged particles in the solar wind intersperse with the plasma, which produces currents. Similar to the charges in basic electrical circuits, these moving charges create a magnetic field, which, in Mars’ case, is fairly weak.

As comet Siding Spring passed Mars, the two bodies came within about 87,000 miles of each other. The comet’s coma rushed over the planet for several hours, with the dense inner coma nearly reaching the surface. Mars was surged with an invisible tide of charged particles from the coma, and at first the changes were subtle. As Mars’ magnetosphere because to react to the comet’s approach, various regions realigned to point in different directions. As the comet drew closer, the effects were heightened. The closest approach, when the plasma from the comet was most dense, Mars’ magnetic field was in complete chaos. Hours after the comet left, small measures of disruption were still present.

Many find the effects of the plasma tide to relate to those of a strong but short-lived solar storm. The comet’s close encounter likely fueled a temporary surge in the amount of gas escaping Mars’ upper atmosphere. Studying this flyby was the largest fleet of orbiting scientific observatories ever flow to another world, orbiting around Mars.