Could there be evidence of water on Mars?! 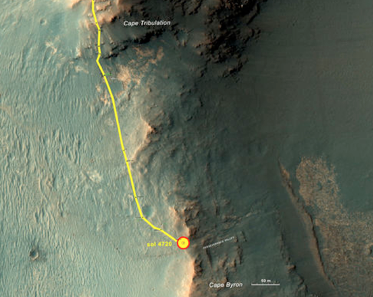 NASA’s Mars Exploration Rover Opportunity, which landed early 2004 in the Meridiani Planum region of Mars, has finally reached its destination after a two-year extended mission. The rover’s mission took it to Perseverance Valley on the rim of the Endeavor Crater. The rover has been taking images of the area in greater detail and higher resolution than what orbital imagery could provide.

It is still unknown how Perseverance Valley formed. Scientists hypothesize that the valley could have been formed due to flowing water, debris flow (small amounts of water with mud and boulders), or even wind erosion. The purpose of the rover’s mission is to provide information to support one the possible formation hypotheses. Opportunity Project Scientists Matt Golombek of NASA’s Jet Propulsion Laboratory, Pasadena, California says, “The science team is really jazzed at starting to see this area up close and looking for clues to help us distinguish among multiple hypotheses about how the valley formed.”

The team plans to have the rover take pictures in a way that will form detailed three-dimensional information on the surface of Mars. However, finding a path across the valley with minimum obstacles for the rover will not be easy. The valley “extends down from the rim’s crest line into the crater, at a slope of about 15-17 degrees for a distance of about two football fields.” The difficulty of this mission is not the descent down the hill, its going back up. The team will need to find a path that is suitable for driving the rover through the whole valley. Researchers plan to have the rover analyze the surface and makeup of the soil throughout all the levels of the valley. Currently, since landing on mars, the rover has traveled about 27.8 miles. We are looking forward to seeing what new discoveries are made from Opportunity’s explorations! #GetExcitedSU