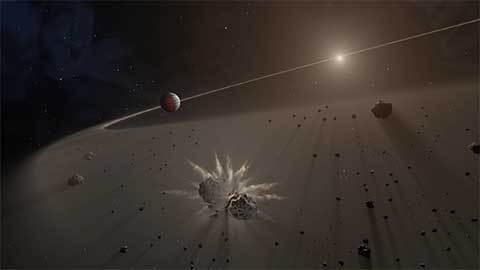 In the past, scientist have had a difficult time locating exoplanets in our galaxy. Though there are billions of them tucked away in little nooks and crannies of the Milky Way, they are often shrouded by the overbearing light of surrounding stars. But a new study suggests there is an indicator by which we can detect them.

Giant exoplanets that have long orbits are more likely to be found around young stars with disks of dust and debris than those without disks. The study uses the term “giant exoplanets” because it focused on planets over five times the mass of Jupiter.

"Our research is important for how future missions will plan which stars to observe," said Tiffany Meshkat, lead author and assistant research scientist at IPAC/Caltech in Pasadena, California. "Many planets that have been found through direct imaging have been in systems that had debris disks, and now we know the dust could be indicators of undiscovered worlds."

The study compared data from 130 single-star systems in which debris disks were detected with that of 277 stars that do not appear to have disks. The results shows that the probability of finding a long-period giant planet is nine times greater for stars with disks than for those without them. The study did not answer the question of why the giant exoplanets cause these disks to form, but study authors have suggested that the great gravity of the giant exoplanets causes small bodies called planetesimals to collide and get caught in the orbit, becoming part of the disk.

Studies like this can help predict the areas where exoplanets are most likely to be discovered and therefore pave the way for astronauts on future missions. #GetExcitedSU