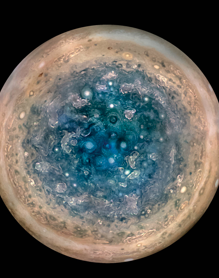 Findings from the first data-collection pass of Juno, after coming just 2,600 miles shy of Jupiter’s cloud tops, are being published! These findings have shattered and exceeded almost all of researcher’s previous assumptions of Jupiter. The absolutely breathtaking image below depicts Jupiter’s south pole. Mission Juno discovered Jupiter’s north and south poles to be covered with huge swirling storms that are densely packed together and rubbing together. Researchers are still determining how they formed and why Jupiter’s poles look so different from one another. Two hypotheses have formed in an attempt to understand this beautiful phenomenon. The first hypothesis is that the two poles are part of a dynamic system and in the next year all that we see will be totally different. The second hypothesis is that Jupiter has been in this stable configuration and the storms will just continue to circle each other. To put these storms in perspective: the polar cyclones are said to be as large as the Earth itself!

Juno’s mission is also in part to study the polar magnetosphere and the origin of Jupiter’s powerful auroras (northern and southern lights). Auroras are caused by particles that pick up energy and crash into atmospheric molecules. However, Juno discovered that the process works differently on Jupiter than on Earth. Juno is more than likely going to provide us with more information on Jupiter’s auroras before the end of its mission, so stay tuned!

While Juno is in a polar orbit, well away from the gas giant, every 53 days its trajectory changes and it advances towards Jupiter from above the north pole. Juno collects information using its eight instruments during a two-hour journey from pole to pole. Every one of these flybys provides us with more information on Jupiter. Scott Bolton of the Southwest Research Institute in San Antonio comments on Juno’s misson, “Every 53 days, we go screaming by Jupiter, get doused by a fire hose of Jovian science, and there is always something new,” In the next flyby of Jupiter on July 11th, Juno will fly directly over Jupiter’s Great Red Spot and uncover the mystery behind the shrinking and swirling crimson storm! #GetExcitedSu