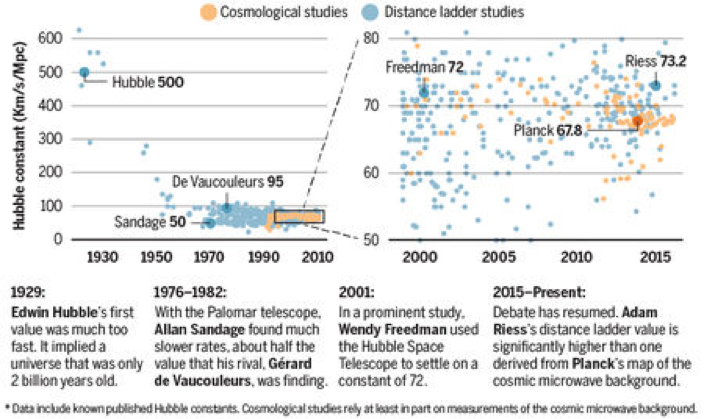 Indicated as H0, Hubble’s constant is the measurement that scientists use to quantify rate of the universe. There are two prominent theories to account for Hubble’s constant and for about fifteen years they agreed with each other. Recently, scientists are concerned because the two methods are increasingly discordant as more and more data is collected.

The first hypothesis in understanding how to measure Hubble’s constant is by observing a type 1a supernovae and taking into account their host galaxies redshifts. When each supernova explodes, it releases about the same amount of light. By measuring the amount of light, researchers can discern its distance. Researchers use the distance of many 1a supernovae as distance markers that are helpful in measuring the universe’s rate of expansion.

The other hypothesis looks at the Cosmic Microwave Background (CMB) or the “afterglow” from the Big Bang. Simply put, when the universe was young it was hot and dense and light couldn’t travel freely through space. As time passed photons were released as a result of the universe cooling. The imprint radiation left by these traveling photons can be used to measure the density of dark matter and dark energy, which make up most of the universe. Using this model and the evolutionary model of the universe they can infer the rate of expansion or Hubble’s constant.

For fifteen years, these methods have been nearly identical in their measurement findings, but recently a study using the first hypothesis found 8 % greater expansion rate for the Supernovae (Type 1a) method. The two sides blame each other for the disparity in Hubble’s constant. The team that works on the second method says that their measurements are becoming more accurate and precise. However, those working on the first method say they are dealing with actual measurements instead of cosmological assumptions. All and all the this leads to a world of questions: Which method is more accurate? Are these methods measuring what we expect them to? Is there a better method for measuring expansion rate? Is there a factor in the equation that researchers are missing?

As researchers dwell on these questions it will be fascinating to see how they develop and change how we understand the universe. Hubble’s constant is essential to understanding our conception of the universe. If we do not know the rate at which we are accelerating, then we can no longer use that to theorize the beginnings of the universe, its size, or makeup. The universe is extremely complex and understanding why these two methods are diverging is important for a more complete comprehension of our universe. #GetExcitedSU