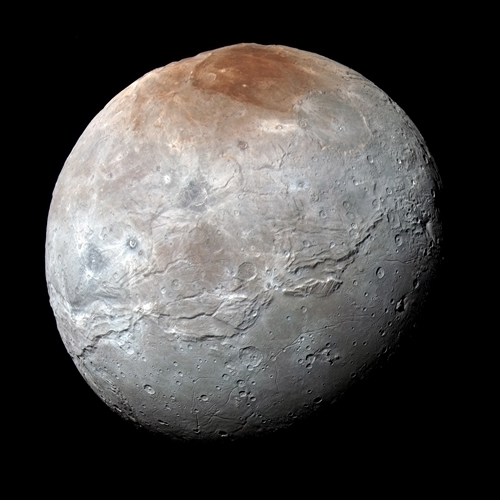 In July 2015 of the New Horizons mission, the spacecraft’s cameras observed a New Mexico-sized splotch of red discoloring the polar region of Pluto’s largest moon, Charon. Scientists have anxiously studied this unexpected phenomenon. Finally, they believe they have the answer.

Methane gas escapes from Pluto’s atmosphere, becomes trapped by Charon’s gravity, and freezes to the surface. The sun’s ultraviolet light causes a chemical process that transforms the methane to heavier hydrocarbons, and then to tholins, molecules with a reddish-brown appearance.

"Who would have thought that Pluto is a graffiti artist, spray-painting its companion with a reddish stain that covers an area the size of New Mexico?" asked Will Grundy, a New Horizons co-investigator from Lowell Observatory in Flagstaff, Arizona and an author of the study. "Every time we explore, we find surprises. Nature is amazingly inventive in using the basic laws of physics and chemistry to create spectacular landscapes."

The team began a study to conclude whether Charon’s environment could support that kind of process. The weather conditions are extreme—one hundred consecutive years of constant sunlight for every hundred years of total darkness, during which time the temperatures drop to -430 degrees Fahrenheit. This is cold enough to freeze methane gas into a solid state. Data suggests that the spring season converts the solid methane back to a gas.

“This study solves one of the greatest mysteries we found on Charon, Pluto’s giant moon,” said Alan Stern, New Horizons principal investigator from the Southwest Research Institute, and a study co-author. “And it opens up the possibility that other small planets in the Kuiper Belt with moons may create similar, or even more extensive ‘atmospheric transfer’ features on their moons.”