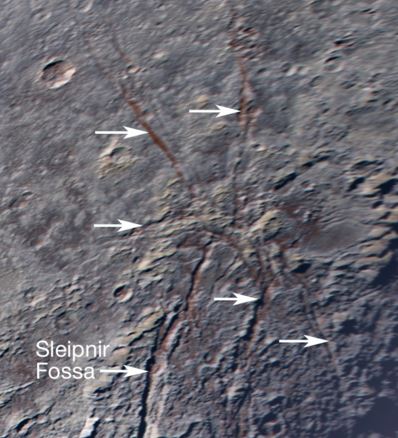 A spider-like feature stretches over Pluto’s icy skin. At least six fractures extend from a central point where they all meet, creating the spider’s “legs” (indicated in the image with the white arrows). It rather resembles novae, radially fractured centers on Venus. Each fracture can stretch for hundreds of miles and exposes an underlying layer of red deposits. The longest fracture runs more than 360 miles long, north to south, and is informally called Sleipnir Fossa. In Norse mythology, “Sleipnir” refers to an eight-legged horse who often galloped into the underworld, with the god Odin the Wanderer on his back. A fossa is a depression or hollow. The shortest fracture is less than 60 miles long. The northern and western fractures carve into Pluto’s rolling plains, and the southern fractures stretch into Tartarus Dorsa’s bladed terrain.

“Oh, what a tangled web Pluto’s geology weaves,” said Oliver White, a member of the New Horizons geology team from NASA Ames Research Center. “The pattern these fractures form is like nothing else we’ve seen in the outer solar system, and shows once again that anywhere we look on Pluto, we see something different.”

Fractures found elsewhere on Pluto often run parallel to each other rather than converging at one central point like a spider body. Scientist theorize that these fractures are caused by global-scale extension of Pluto’s water-ice crust, whereas the spider-like fractures may be caused by a concentrated source of stress in the crust.