Published on April 6, 2016 by Jacqueline Taylor   Share this on: 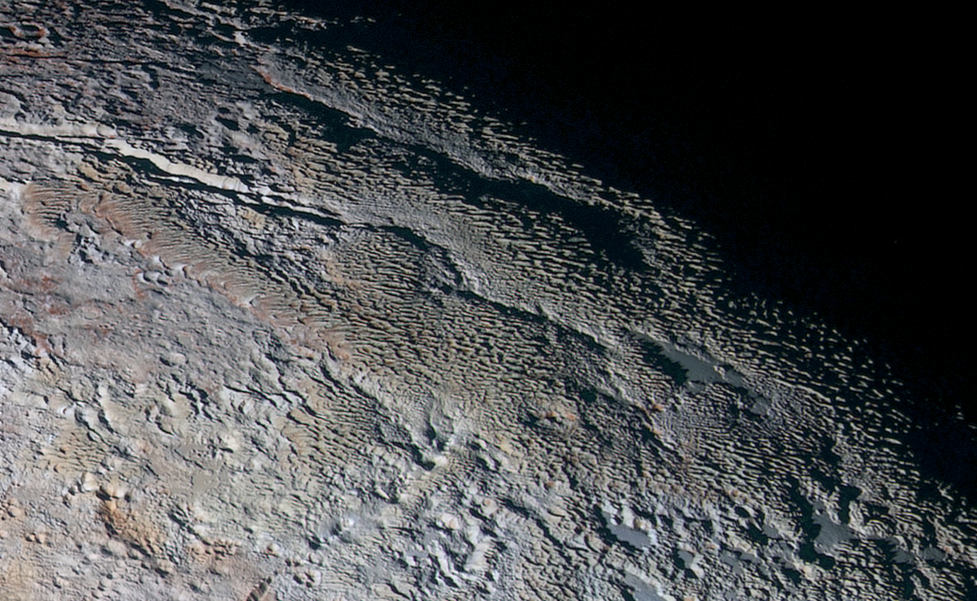 A record from a time before our solar system was created may exist in a uniquely rough patch on Pluto’s surface. Newly developed photos reveal an area of bladed terrain in the Tartarus Dorsa region located on the Eastern edge of Tombaugh Regio. A closer look shows that the snakeskin appearance is made up of raised reliefs spaced 3-5 kilometers, and covering 550 yards. Spectroscopic measurements from the area indicate a predominance of methane ice with a relative amount of water, though structurally this does not agree. Considering the height and angle of the reliefs, as well as Pluto’s -300 to -400 degree surface temperatures and gravitational force, studies suggest pure methane ice reliefs would have flattened out within decades. However, hydrated methane ice would be strong when arranged as a clathrate, which are “cages” formed by one type of molecule around a single molecule of another species. In this case, a single molecule of methane could be encased by water molecules, which form stable structures in extremely cold conditions. These clathrates not only exist at the bottom of our oceans, but also on the icy moons in the outer solar system, and in the Kuiper Belt, of which were created before the existence of the solar system within the protosolar nebula. If the reliefs on Pluto are, in fact, composed of clathrates, then that could mean that the clathrates were created within the protosolar nebula too, before being eventually displaced onto Pluto. Scientists might not know the answer for years to come, but if the theory is true, it would give huge insights into the history and creation of our solar system.