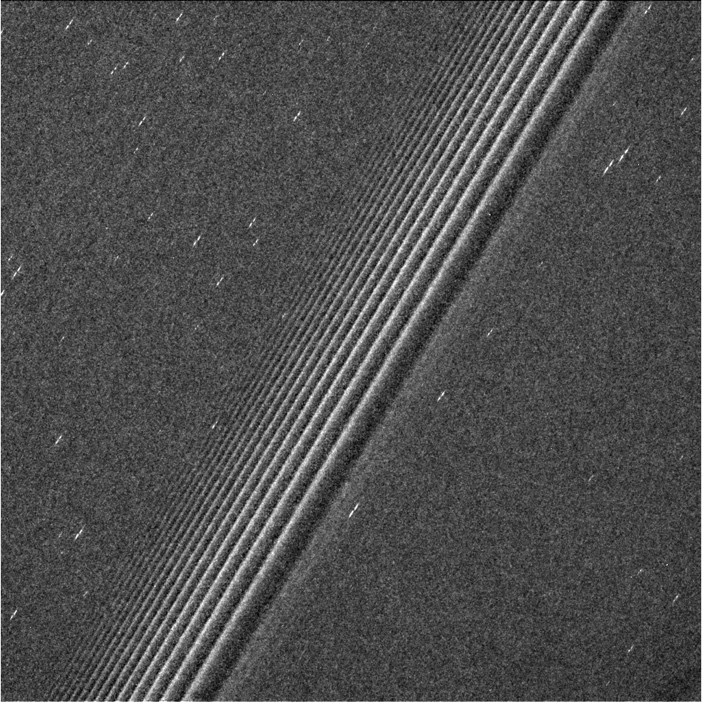 The Cassini Solstice Mission’s spacecraft, a joint US and European endeavor, has taken the sharpest images to date of propellers in the middle part of Saturn’s A ring.

Propellers are the small, bright double dashes that are visible on both sides of the diagonally-crossing wave pattern in the image below. They were first discovered during Cassini’s initial 2004 arrival at Saturn. Several views of propellers were captured during the 2004 arrival in pictures taken very close to the rings. However, those images did not easily aid in understanding how these small propellers were related to the larger ones Cassini later observed due to the pictures’ low resolution.

On April 19th 2017, using the spacecraft’s narrow-angle camera, NASA’s Cassini captured the sharpest image yet seen of these propellers in the middle part of Saturn’s A ring. Capturing this view has put Cassini’s initial images of propellers into context and has shown scientists the propellers’ newly discovered range of sizes. Scientists will also use the new information to uncover more about the origins of propeller moons.

The image’s view from Cassini looks at a point about 80,000 miles from Saturn’s center. The image itself has a scale of .24 miles per pixel and was taken at a phase angle of 108 degrees. Sharp images such as this one will continue to increase scientists’ understanding of this phenomenon.