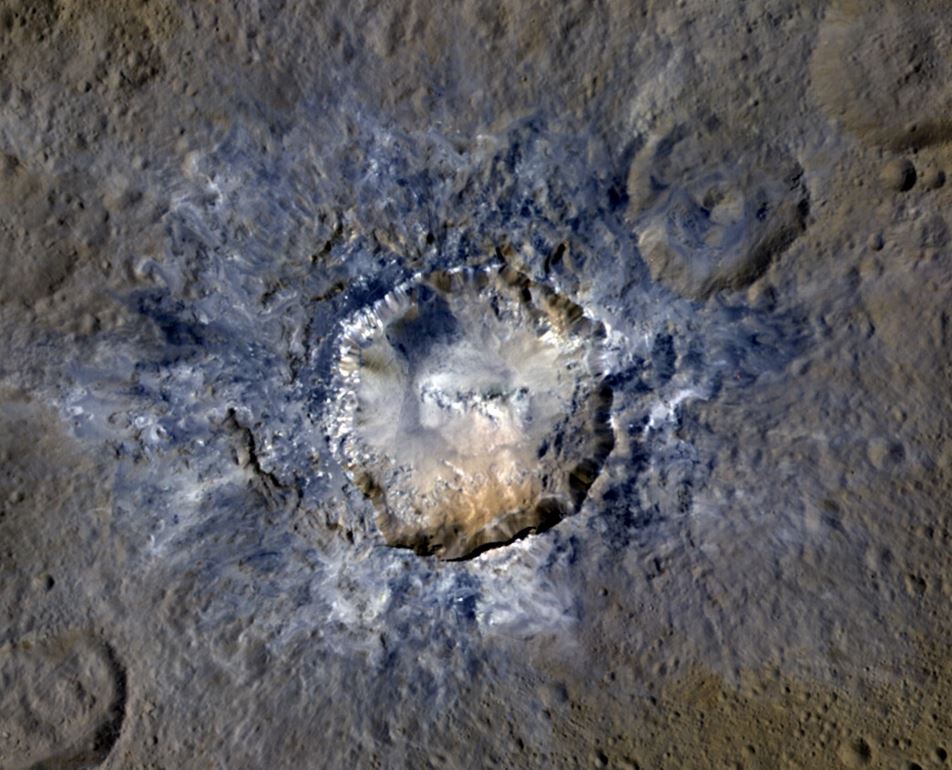 NASA’s Dawn Spacecraft took photographs of the Haulani Crater on Ceres, the dwarf planet perched between Mars and Jupiter. “Haulani” is a Hawaiian name comprised of two parts—the first being “hau,” a prefix often preceding the name of a goddess and the second being “lard,” meaning “heaven” or “royalty.” Despite being at an altitude of 240 miles, the Dawn spacecraft captured exquisite images and revealed what seems to be a bright material in the crater. Scientists used this false-color view image to study the geography and morphology of the surface. The seemingly blue rays in the picture represent the younger features of Ceres.

"Haulani perfectly displays the properties we would expect from a fresh impact into the surface of Ceres. The crater floor is largely free of impacts, and it contrasts sharply in color from older parts of the surface," said Martin Hoffmann, co-investigator on the Dawn framing camera team.

It is particularly interesting that the crater is polygonal, which means its shape is composed of several straight sides, whereas most craters are almost circular. This polygonal nature implicates pre-existing stress patterns and faults beneath the surface. Another interesting feature of Ceres is the Oxo Crater, about 6 miles wide and the second brightest crater on Ceres. It has a relatively large slump in its rim from where a chunk of material dropped below the surface.

"Little Oxo may be poised to make a big contribution to understanding the upper crust of Ceres," said Chris Russell, principal investigator of the mission. Oxo is only one of the many unique features that make Ceres such an intriguing world.