The Skeleton of the Galaxy 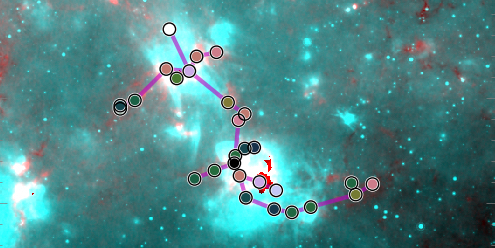 Scientists have now unveiled half of the Milky Way’s framework by pinpointing large filaments of gas and dust between stars. Its framework is structured by these filaments, some of which are hundreds of lightyears long such as Nessie, the infrared dark cloud. Because of its location along the center of the Scutum-Centaurus spiral arm, Nessie was declared a bone of the Milky Way in 2013. Subsequential studies have discovered other notable filaments, but these studies have all commenced with visual inspection.

A group of astronomers at the European Southern Observatory decided to create a way to automate the detection process. They used a customization of an algorithm called “a minimum spanning tree.” to perform an automated search of data from the Bolocam Galactic Plane Survey. This method identified 54 large-scale filaments. Their project inspected almost half of the galactic plane, and they estimate that there may be as many as 200 total large-scale filaments in the Milky Way.

The team catalogued their data about the filaments such as mass (1000-100,000 solar masses), length (30-900 lightyears), aspect ratios, temperatures, etc. Based on these files, they drew four conclusions. First, the filaments are largely dispersed along the galactic disk, with 50% within 65 lightyears of the galactic plane (the Sun is 82 lightyears above the galactic plane). Second, a third of the filaments are part of the Milky Way’s skeleton. Third, filaments like these contain around 1% of the molecular interstellar medium in our galaxy. Fourth, the formation of massive stars occurs more favorably in large filaments, relative to elsewhere in the Milky Way. The team intends to continue the project by studying the rest of the galaxy.