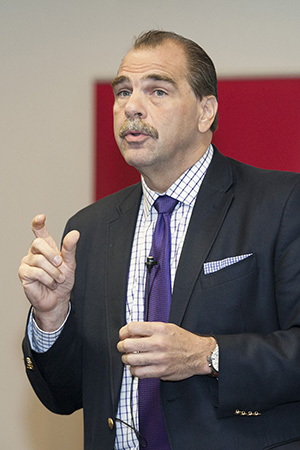 Economist Richard Yamarone of Bloomberg daily financial news began his lecture at Samford University May 9 with information he said every college student needs to know to get a job.

"You have to get out of the academia frame of mind when you go to an interview," said Yamarone (right).  "It is a different world."

He advised students to take on classroom projects that will increase their portfolios, to contact people in the industry they admire for informational interviews, and most importantly, to read.

"You have to read about current events," he said. "Take 30 minutes every day. It is that important."

Yamarone continued his lecture by going through what he sees as the current economic state of the country, providing examples he noticed while compiling Bloomberg's Orange Book.

"Eighty-two percent of Americans are employed in the service sector," he said. "We created the iPhone but we didn't manufacture it."

And though jobs numbers appear to be increasing, Yamarone says he thinks the country is moving towards a recession.

There is no Holy Grail of economic indicators, he said, so he uses what he calls his "Fab Five" indicators to watch: jewelry and watches, cosmetics and perfumers, dining out, women's dresses and casino gambling.

Sarah Waller is a journalism and mass communication major and a news and feature writer in the Office of Marketing and Communication.