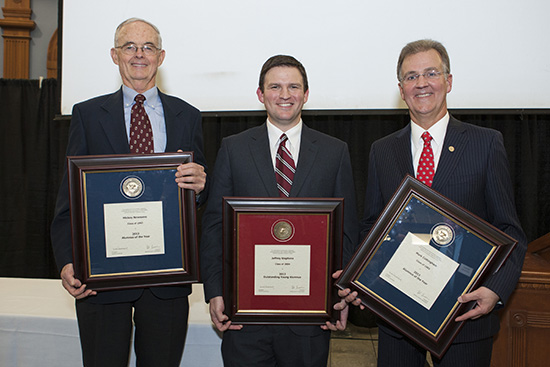 The traditional alumni banquet recognized alumni of the year honorees Mark Cottingham, Class of 1983; Mickey Newsome, Class of 1962; and Sylvia Snider Young, Class of 1983. Jeff Stephens, a 2004 graduate, was named Outstanding Young Alumnus. His honor recognizes a distinguished graduate of the last 10 years.

Samford Alumni Association president Keith Herron, Class of 1986, noted that Samford's 45,000-plus alumni live, work and serve in a variety of ways throughout the world. "Each has a unique story both about their lives and their Samford experiences," Herron said, noting that this year's honorees are exemplary of the "thousands of Samford alumni who are making a difference every day."

Cottingham, worship and arts pastor at Johnson Ferry Baptist Church in suburban Atlanta, Ga., was cited for his ministry achievement and his consistent recruitment of students to Samford.

"Mark is one of the best student recruiters that Samford has, and dozens of past and current students have chosen Samford through Mark's encouragement," said Samford vice president for advancement W. Randall Pittman.

Newsome, executive chairman of Birmingham-based Hibbett Sporting Goods, Inc., was recognized for his achievements in business and his support of Samford scholarship programs. During his 48-year career with Hibbett, Newsome has led the company in tremendous growth, Pittman noted.

Newsome stays connected to Samford through the Brock School of Business Advisory Board and his support of Samford athletics.

Young, president of Denver, Colo.-based Continental Division of Hospital Corporation of America, was chosen for the honor because of her accomplishments in health-care administration and her leadership abilities.

The honoree was unable to attend the banquet due to a sudden business obligation, said Pittman, who introduced her niece, 2013 graduate Sally Snider, as her representative.

Stephens, general manager of Birmingham-based 365 Incorporated sports marketing and sporting goods company, was cited for his commitment as an undergraduate and now as an alumnus.

"Jeff was very active as a student and has continued that active involvement with the university through mentoring students, working with the Brock School of Business and in financial support," Pittman said.

Challenge of the Classes winners were:  Class of 1974, top dollar producer with more than $1,032,000 contributed during fiscal year 2012; Class of 1962, largest number of donors with 69 givers; Class of 1952, highest percentage of donor participation with more than 41 percent of its members giving back to Samford.

The Class of 2007 won a relatively new category that underscores the important role that young alumni play in annual giving. The class was recognized for the highest percent of donor participation among young alumni with almost 9.4 percent of classmates giving just 5 years after graduation.

Cripps noted that multiple groups are celebrating reunions at the banquet and throughout homecoming weekend.

Sororities Alpha Delta Pi, Alpha Omicron Pi and Chi Omega, and the Class of 1963 have created scholarships as part of their reunions celebrations, she announced. In addition, the Classes of 1983, 1988, 1998 and 2008 have contributed special gifts to multiple areas across campus in honor of their reunions.

"Together these groups have raised $177,000," Cripps said, as group representatives presented a check to Samford president Andrew Westmoreland. "We are a truly grateful for your generosity."

The banquet program included introduction of new Alumni Association officers:  president Gil Simmons of Birmingham, Class of 1983; and vice president for activities Lori Sullivan of Birmingham, class of 1979. Spurling will return for another term in his role.

Herron, who has served as president for three years, and 2007 graduate Katie Murname, who served as a vice president for two years, were thanked for their service as they complete their terms of office.

Westmoreland concluded the program by noting the stories he has heard of people who arrived at Samford as the proverbial stranger.

"Samford invited them in and helped them become the men and women they are today. We are all better for the experience we have shared at Samford," Westmoreland said.

Prior to the banquet, many alumni gathered for a program of choral vespers in Reid Chapel. Worship leaders included alumni Bob Hatfield, who holds bachelor's and doctor of ministry degrees, and Rosemary Mims Fisk, a 1977 graduate.

The program of song, scripture and worship concluded with alumni members of the A Cappella Choir joining this year's choir in singing Beautiful Savior. David Walker, a 1981 graduate and former choir member from Birmingham, said such moments are special.  "I remember what these singers are experiencing.  It will last the rest of their lives."

Earlier in the day, members of classes of 1963 and earlier gathered for the Golden Bulldog reunion lunch on the stage of Wright Center. About 100 alumni and guests visited as cherished friendships were rekindled.

Many former classmates, such as 1963 graduates and former Vail Hall residents Linda Phillips Allen of Scottsdale, Ariz., and Brenda Vinson Hosier of Huntsville, Ala., had not seen each other since their graduation.

The customary David Lockmiller awards were given to recognize the male and female graduates present from the earliest class.  Winners were Roy Anderson, a 1951 graduate who lives in Birmingham; and 1949 classmates Inice Carlisle Tarrant of Dothan, Ala., and Pat Trent Scofield of Birmingham.

Homecoming events continue on Saturday with many tailgate reunions, a parade, football game and other events.