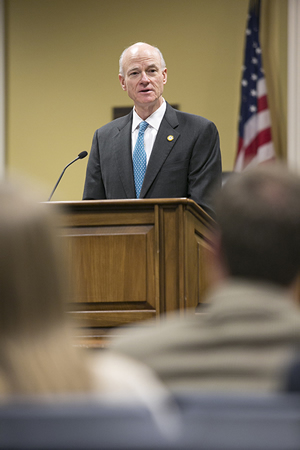 “Access to justice is a pillar of our society, but that pillar is weakening and potentially could crumble,” Hubbard said.

And the future lawyers, with their fresh, innovative thinking and technical know-how, may hold the answer to close the justice gap, said Hubbard, a guest of Cumberland’s Cordell Hull Speakers Forum.

“We need innovative new ways to provide legal services,” he said, noting that people today live and learn differently than in years past.  “Our clients and those who could be our clients expect us to deliver legal services differently, in a more modern way.”

In recent decades, despite the legal profession’s efforts to raise money, advocate funding for legal aid programs and give much pro bono service, he said, “We have barely moved the needle on access to justice.”

The Columbia, South Carolina, attorney cited statistics that 80 percent of people who are poor, and many others of moderate means, do not get the civil legal assistance they need.

In some states, in 95 percent of cases in the family courts, at least one party is not represented by counsel.  Almost 3.7 million people use the nation’s nearly 500 court-based legal self-help centers but many centers have to turn people away, and half of those who apply for legal aid are turned away because of a lack of available resources to help, he said.

The U.S. ranks 66th of 99 countries in accessibility and affordability of civil justice in a World Justice Project’s 2014 Rule of Law study, said Hubbard, who serves as chair of the board of directors of the WJP.

According to American Bar Foundation research, less than one-quarter of civil justice problems in the U.S. are taken to a lawyer.

“Many on the lower end of the socio-economic scale do not seek legal help because they do not recognize their problems as legal problems.  They see them as personal problems, moral failings or issues that just happen in life.  There is a big educational component that we must recognize,” Hubbard said.

And while the poor may do nothing, those in the middle-income bracket may engage in some form of self-help using online services, or they try to go it alone. The one-on-one model of one lawyer working in person with one client at a time does not meet the demand, he said.

The answer is to engage in fresh, innovative thinking about how to close the justice gap while enhancing opportunities for lawyers in their practices, said Hubbard, who helped establish the ABA’s Commission on the Future of Legal Services.

Smartphone apps could make legal assistance more available and user-friendly to a wider audience. A “disastr” app, for instance, provides public safety information, news and legal presentation forms that can be helpful to disaster victims.

These technologies must be embraced as part of a holistic approach to justice, he said, noting a report that 86 percent of adults making less than $30,000 per year own mobile phones and nearly half own smartphones. “We need to use these technologies to reach those whose legal needs are not being served.”

He noted the rapid rise in dollar investments in legal technology start-ups, a figure that is expected to top $1 billion in 2014. “These are not investments in law firms, but are technology companies that offer legal services. Our challenge is to marry this creativity with our justice system to provide greater access while protecting the public,” he said.

He told the students that they, having grown up with innovation and technical know-how, are the innovators and entrepreneurs with the capability to rethink problems and re-imagine solutions.

“It’s in your DNA, he said. “The profession is getting ready to fundamentally change, and you can lead the way.”