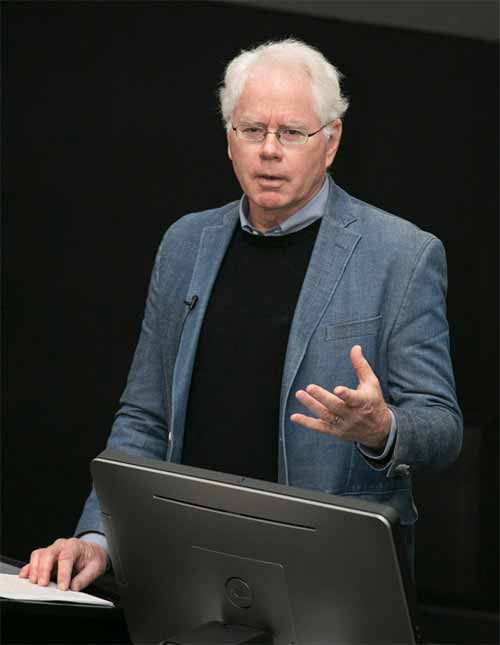 Samford University history professor Jim Brown drew on 40 years of teaching memories and research for a discussion of his new textbook, Fairy Tales, Patriotism and the Nation-State; The Rise of the Modern West and the Response of the World on Homecoming Saturday. The book connects the rise of technology, nationalism, empire-building and independence movements, and adds the innovation of custom Google Earth maps to show geography’s role in shaping culture.

Many members of Brown’s audience were reliving the lectures of their undergraduate years, and Brown named many of those former students as he spoke of the experiences that inspired his own restless curiosity.

Brown recounted his own experience as a student during the late 1960s, when cultural turmoil nudged him from engineering to the study of the past and other cultures. He interviewed for a new history faculty position at Samford in 1970, found a niche for his focus on Eastern Europe and Asia, and got the chance to be immersed in teaching–lots of teaching.

Brown’s five-course schedule was tough, but he said he relished the contact with students, especially those who shared his taste for first-hand experience of subjects outside of the classroom. He also found colleagues who shared his interests and introduced him to new ones, including Alabama’s unique natural environment. Others helped him polish his Russian language skills or encouraged him to lead his students to China or the Peruvian Amazon.

Educator Elliot Wigginton’ s “Foxfire” experiential education project and book–a collection of folklife articles by Georgia high school students–gave Brown “a road back to American culture”  in the early 1970s and inspired similar projects at Samford. Among the most notable of these was a 1976 grant from the National Endowment for the Humanities that helped Brown and his students document folk craft survivals in 10 counties around Birmingham. “My time machine for the bicentennial year was a rusty old Chevy II, with a four-year-old son sometimes riding shotgun,” Brown said.

Brown described many encounters outside the university that also enlarged his perspective. He bonded with Japanese ESL students over mutually inexplicable religious histories. His first visit to a Sacred Harp singing was “like standing in the surf,” as waves of music reminiscent of Russian folk songs and Gregorian chant broke over him. Reading a name in a craft shop led him to learn traditional basket making from a wry master. Brown followed the threads that connected all of these things and brought his students along on the adventure. His new textbook is the most recent expression of that.

Brown’s textbook also grows out of his early interest in Geographic Information Systems (GIS,) and, before that, the writing of landscape architect Ian McHarg. On the way to his book, Brown created a system of 3D physical maps to explain to young people the connections between culture and environment. As GIS evolved, Brown helped lead efforts at Samford to incorporate the new technology across the curriculum. When he presented a paper on that subject at a 2005 academic conference, an audience member’s question led him to explore the Google Earth geographic information program.

The results of that exploration appeared on the screen of Christenberry Planetarium on Homecoming Saturday as Brown “flew” his audience through the landscapes that help explain, for example, the Sykes-Picot Agreement that shaped the modern Middle East, or showed the often-ruinous path into (and out of) Afghanistan.

Brown lamented the price of his textbook–the first to make such use of GIS–but noted that the information-rich maps he created for it are free. The book does include very handy instructions for using Google Earth, however, and is already popping up on the Christmas wish lists of Samford alumni who, more than anything else, majored in Jim Brown.