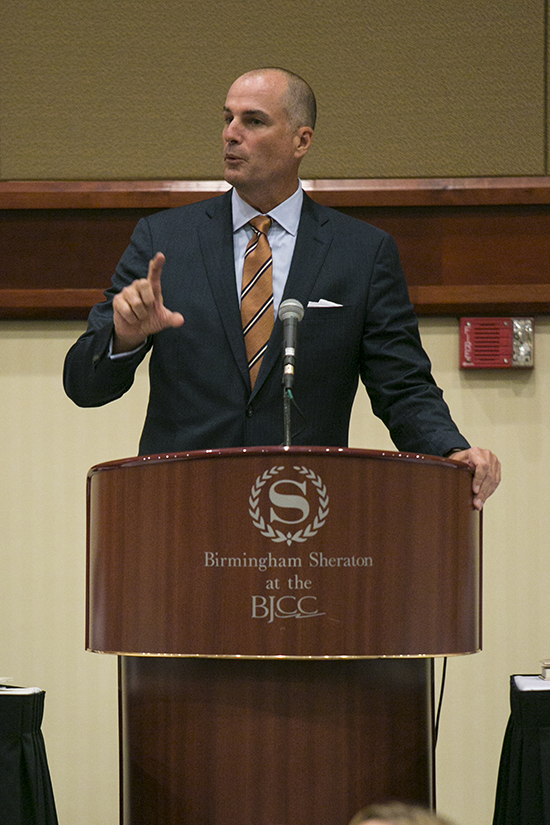 Policy issues in college athletics are going to continue to be a hot topic for the foreseeable future, according to college basketball analyst and attorney Jay Bilas.

College athletics is "big business,” and there is pending litigation that could change the way “all of this works,” Bilas told participants in the annual Jere F. White Jr. Trial Advocacy Institute. His appearance was co-sponsored by Samford University’s Cumberland School of Law and the American College of Trial Lawyers.

Bilas covered a wide range of topics, drawing on his eight years of experience as a commercial litigator before taking a full-time role with ESPN. He is a graduate of Duke University Law School.

Noting that the business of college athletics is very different today than when he was a basketball player at Duke University in the early 1990s, Bilas said that 30 years ago the public would not have watched or supported college sports if coaches were being paid millions of dollars annually and television rights were being sold in the billions of dollars.

“People would have said ‘That’s not right’,” Bilas said.

Bilas said that the people involved in college sports are “great,” from the National Collegiate Athletic Association (NCAA) to conferences to the colleges themselves. The challenge is that college athletics has become a huge business.

His concern is that athletes themselves don’t get to share in the money that college athletics is making. The problem hasn’t been revisited in a rational way in years, and the pending litigation could change that.

No longer can colleges simply say to students, “You will get to train and play in some of the finest facilities, and you will have the opportunity to get a good education. That should be enough,” Bilas said.

College athletics has become a multi-billion dollar business “except in the way the athletes are treated,” he explained. “You can’t tell the difference in the Super Bowl and the college football national championship game – the hype, the television contracts, the exposure -- except that the players in the college game will be back in class a few days later with no compensation.”

Colleges can’t use lack of funds any longer as an excuse for not considering compensation for student-athletes, Bilas said.

“If you can pay coaches million dollar salaries, build big facilities and have multi-million dollar athletics budgets, you have enough money to compensate student-athletes,” he explained.

Bilas cited several other contradictions in the way college sports are handled, including interpretation of some NCAA rules.

He used his own daughter, an artist who currently attends Duke University, as one example. Noting that if she is able to sell her art while a student, why couldn’t Heisman Trophy winner Johnny Manziel sell his autograph while still a student at Texas A & M.

He also noted that A & M’s 12th Man Foundation was able to sell a table hosted by Manziel for $20,000 at their annual banquet, but Manziel was penalized for selling his autograph for “just a few bucks” in comparison.

Closer to his audience, Bilas told the story of a former University of Alabama basketball player who had graduated but still had eligibility left. "She has wanted to transfer to Seton Hall University, near her home, for graduate study, but the University of Alabama won’t release her from her letter of commitment. The student would have to sit out a year before she could finish her eligibility at Seton Hall."

“We say that athletes should be treated just like other students,” Bilas said. “No other students are told they can’t transfer to another school without a waiting period."

“This young woman is not going to be at Alabama no matter what. She’s already graduated, so it makes no difference to the University of Alabama. To say she can’t transfer and play immediately is just wrong.”

Bilas’ keynote address was part of a day-long conference hosted by the Institute, which is named for the late Birmingham attorney and Cumberland School of Law graduate. Bilas and White became friends when White was being treated for cancer at Duke University Medical Center. The 2014 conference coincided with the anniversary of White’s death on Oct. 3, 2011.