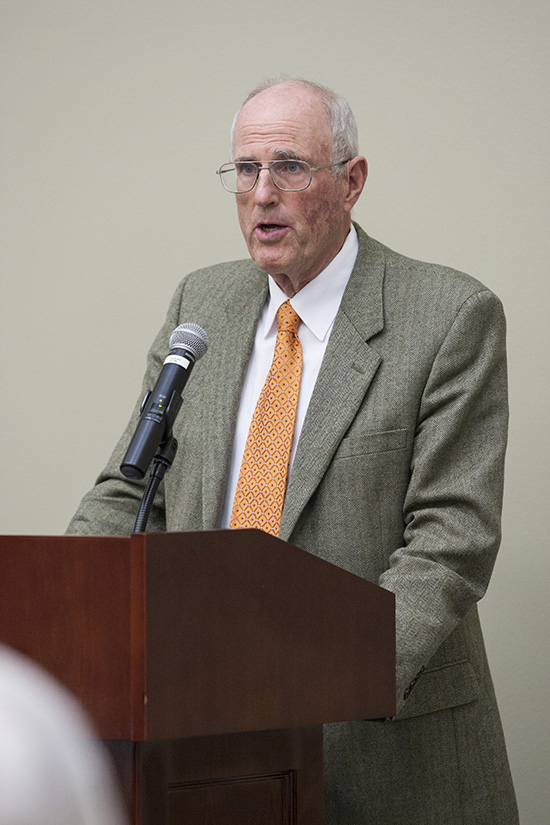 The Middle East won't become stable, democratic or prosperous overnight, but the U.S. can use its influence, "sparingly and judiciously" to nudge the process along, former ambassador to Oman David Dunford said at Samford University Tuesday, March 4.

"'The Arab Spring is only a little over three years old, and positive change takes time," said the career U.S. diplomat.  "Our own democracy is still a work in progress."

Dunford is at Samford March 3-7 as this year's Woodrow Wilson Visiting Fellow, speaking to students, faculty and community members in a variety of settings on and off campus.

The U.S., he said at a public dinner and lecture on Tuesday, can be better effective in the Middle East, where situations are different in each country, if there is less concentration of decision-making in Washington, D.C.

"Let the folks on the scene define plans for action based on a strong and fully integrated country team," said Dunford, adding that the U.S. is necessarily moving away from military solutions and more to diplomacy.

This will require U.S. diplomats to develop relationships across a wide spectrum, he said. "Persuading the autocratic leader will often no longer suffice. "

It also means a need for more civilians with language and area skills.  "Diplomats need to be out and about, not cowering in bunkers or moving around in armed convoys," said Dunford, whose 29-year foreign service career included four years in Saudi Arabia during the 1990-91 Gulf War. In 2003, he was the senior official in charge of organizing Iraq's Ministry of Foreign Affairs.

Just because something is important to U.S. interests doesn't necessarily mean that we can positively affect it, he said, and Americans have amply demonstrated that we are not very good at remaking the domestic policies of Muslim or Arab states.

"We bring all sorts of baggage," such as Western secularism, a history of European colonialism, and intervention in Iraq and Afghanistan, he said.

"The invasion of Iraq was one of the worst strategic blunders we've ever made," said Dunford, who now teaches at the University of Arizona.

Dunford believes that the U.S. can be more effective abroad if it fixes its own political and economic problems, and gets smarter  about reducing dependency on hydrocarbons, for instance.

"We need to continue to be engaged.  There is no alternative.  Without us, the world will enjoy less governance, which will make it more disorderly and less prosperous."

Dunford gave an overview of recent Arab uprisings and key facts about the Middle East, citing its large oil reserves, its large numbers of young people who are "educated and wired, but frustrated because they have no jobs," its big and bad government, and Islam, which "pervades the atmosphere, culture, language and politics."

"Islam is like a river that takes on the color of the cultural bed through which it flows," Dunford said.

"Egypt is a mess," he said, and while there is a desperate need for dialogue between Islamists and secularists there, "that window appears closed."

Common threads that run through many of the situations include the globalization and communications revolution. Satellite TV, he said, has told Arabs all over the Middle East things they've never known before.

But he advised against making too much about the impact of Facebook and Twitter, which, contrary to what some believe, were not totally responsible for the Arab Spring.

"Things have gone viral before," he said, noting the impact of Martin Luther's 95 theses and civil rights icon Rosa Park's refusal to give up a seat on a Montgomery, Ala., public bus.

At a gathering of Samford faculty members on Monday, he discussed his book, Talking to Strangers: The Struggle to Rebuild Iraq's Foreign Ministry, which he co-wrote with retired Iraqi ambassador Ghassan Muhsin Hussein. The book chronicles U.S. efforts in the early days of the U.S. occupation of Baghdad.

There,  he observed a troubling relationship between the military and civilian workers in the U.S. contingent. Many young members of today's military have no knowledge of history or diplomacy, he said.

He would like to see higher education leaders encourage more people-to-people exchanges, which would enhance global knowledge. "Books and classrooms are great, but getting people to talking is the best thing," he said.

"When people talk, differences begin to melt away."

Dunford's Samford visit also included sessions with classes, the school's Model United Nations team and University Fellows.  He is also scheduled to meet with the Birmingham Rotary Club and the Women's Committee of 100 for Birmingham. The Tuesday dinner and lecture audience included about 40 members of the Birmingham Committee on Foreign Relations.