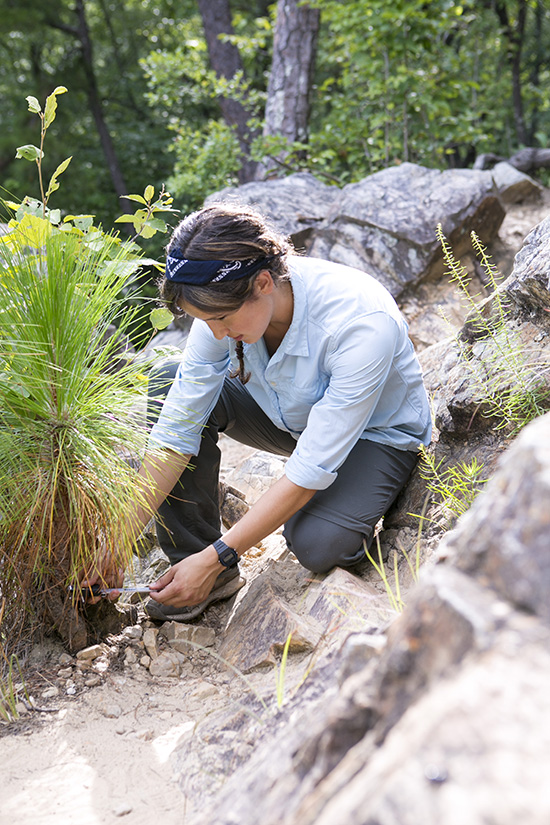 Oak Mountain State Park is Alabama’s largest such facility and is known as a treasure trove for the outdoor enthusiast. With more than 50 miles of hiking, biking and equestrian trails, complemented with two fishing lakes, picnic facilities, beach and golf course, the park provides a recreational mecca.

Yet, its ecological value to the region, perhaps largely unknown to visitors and the community at large, may be as valuable or more so, according to a group of 24 undergraduates from around the nation who studied there during the past two summers.

Directed by Samford biology professors Betsy Dobbins and Malia Fincher and funded by a $240,000 Grant from the National Science Foundation-Research Experience for Undergraduates, (NSF-REU), the students were from 21 colleges and universities in 17 states, including two from Samford, who were chosen for their interest in biological research and academic acumen.

“The most important result of our program is that we were able to offer a high-quality, intensive research experience to 12 outstanding students and they had the opportunity to work closely with Samford and Birmingham Southern faculty mentors,” said Fincher. “Both the actual research experience and the mentor-student relationships that developed during the course of the summer will hopefully prepare these students to pursue higher study and careers in science”

In their final reports July 30, the students shared their findings, methodology of research, and benefits or effects related to the current situation at the Park. These ranged from sediments in streams as a result of hiking or biking trails, the effects of fire suppression and prescribed fire on plants and spiders, and the potential of Oak Mountain fungi for use in removing estrogens from wastewater.

Some examples, according to Dobbins, are:

* The long leaf ecosystem has benefitted from the prescribed burns and from deer reduction. There is more deer browsing in the foothill areas of the park than on the South facing Ridges. Spiders that live in the leaf litter are larger in areas burned 5 years ago (recovering) rather than those burned last year (stressed) or where fire suppression (no burning and no habitat) have occurred.

* The turkey tail mushroom, Trametes versicolor, is effective at degrading estrogens and could provide an inexpensive way to remove pharmaceutical estrogens from wastewater.

* The increased heat from urban areas (urban heat island effect) may shift the life cycle of moths and butterflies – particularly the emergence of adult lepidopterans from cocoons.

* There was also a genetic investigation of the animals that supply the food web in motorcycle pond (Oak Mountain SP), but the results of DNA sequencing to identify the organisms have not returned.

Follow-up surveys with first year (2013) participants, according to Dobbins, indicated that 11 of the 12 students plan to pursue a career in science with two of four May 2014 graduates enrolled in PhD programs (University of Alabama, Washington University), one enrolled in a Master’s Program (MSPH, Meharry) and one taking a year off before enrolling in a PhD program. The eight students who did not graduate in May 2014 are all involved in additional science research or internships for summer 2014 and plan to return to their respective campuses in the fall.

Last year research results with direct implications for park management were presented to the Alabama Department of Natural Resources and officials at Oak Mountain State Park. “We will do this again this year,” Dobbins said. “Some of this year's results (particularly those about the impact of bike trails on adjacent streams) are critical. The data will also be given to the Oak Mountain Interpretive Center, an interactive family-oriented science and nature museum in the park, to create and enhance museum exhibits.”

Fincher said she was most impressed by the tenacity with which many of the students worked to improve their skills over the course of a short 9-week program, putting in long hours to collect data in the field and laboratory, improve their writing and speaking skills, and learn how to analyze their data. “The willingness of students to invest time and effort in their fellow students is also inspiring,” she acknowledged. As a result, according to Fincher, the biology department is applying for continued funding of this program from the National Science Foundation and will be seeking additional sources of funding.

“The goal was to improve the quality of student undergraduate science preparation, build skills, and motivate students to continue in science,” Dobbins said.. “We would say we were highly successful.”