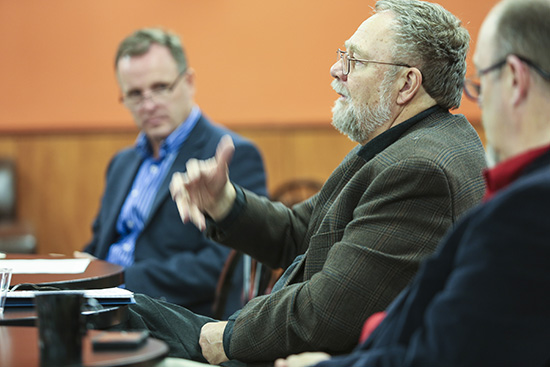 Many alumni of this leading liberal arts university likely return to campus with more memories of challenging lectures than of challenging football games. For them, Homecoming is enriched by the chance to learn from new generations of Samford faculty.

An informal Homecoming Coffee Talk Oct. 31 presented three distinguished professors offering personal insight into “global hotspots” Ukraine and the Middle East. Fred Shepherd serves as chair of Samford's Political Science Department and has published, taught, and engaged in activism in the areas of US foreign policy, genocide, religion, and human rights. Bob Green teaches in the Cumberland School of Law and was a Fulbright Scholar at the National Academy of Law in Odessa, Ukraine. James Strange teaches in Samford’s Religion Department and directs the Shikhin Excavation Project in Israel.

In his introductory comments, Shepherd noted the insufficiency of existing “grand strategies” for U.S. engagement with the world’s political problems. The understandings and solutions left over from the cold war and even the ongoing “war on terror” are simply out of touch with current events and even partially discredited in the latter case, he said.

Shepherd said he is not opposed to the idea of a grand strategy that would serve as the foundation for U.S. policy. He observed, for example, that a nuanced emphasis on human rights might help the U.S. address problems ranging from civil war in Syria to Ebola. But Shepherd warned that any such strategy “can lead us to overlook complex realities.”

Green, an energy expert whose experience in Ukraine includes his 2008 Fulbright work and a 2010 lecture and research trip, described a region torn by its strategic importance and by its position as a cultural and political buffer between Russia and Europe. There are real cultural divisions between the Crimean Peninsula–now annexed by Russia–and the rest of Ukraine, which has historically identified more with Europe.

Ongoing violence in Ukraine is not simply a matter of Russian nostalgia for the former Soviet Union, Green said. He echoed Shepherd’s warning about the insufficiency of cold war understandings, but also observed that the region is shaped by its history. Ukraine did not exist as a state until after the Russian Revolution of 1917, and its current instability is related to the collapse of the Soviet Union.

Green also noted that Russia president Vladimir Putin is a veteran of the Soviet-era KGB. Instability was a very Soviet method of manipulating people, Green said, and might still play a part in Putin’s strategies. “As long as Ukraine is there, it is in Putin’s interest to keep the pot boiling and keep the West uncertain about what’s going to happen next.”

Strange, whose excavations bring him into regular contact with Israelis of differing religions and cultural affinities, said the common American notion that “they’ve been fighting over there for thousands of years” is too reductionist and fatalist. He said it is more accurate and more helpful to consider the complex narratives that the people of the region tell themselves.

Strange reminded his audience that not all Israelis are Jewish, and even those who do identify with that broad category divide into sub-categories, including religious and secular. And, he said, there are many Muslim and other non-Jewish Israelis. Strange said the differing perspectives tend to unify around identity as Israelis and value the stability and security of the state of Israel over broader cultural categories.

One Muslim Israeli Strange spoke with recently didn't’t understand why the U.S. would support Syrian rebels who seek to undermine the stability of the secular, if tyrannical, government of Bashar al-Assad. At least among Muslim Israelis, Strange said, there doesn’t appear to be a “pan-Muslim” understanding, much less specific identification with Hamas, Syrian rebels and ISIS.

Strange said the Palestinians he meets have a strong sense of the historical instability of the region, a sense of grievance and a fatalism borne of routine violence, but they desire peace. And although Strange said Western media tend to focus on violence in the region (unless there’s a major archaeological discovery,) the “mundane existence” and interactions of its people are not nearly so “one-sided” as the perspectives of outsiders.