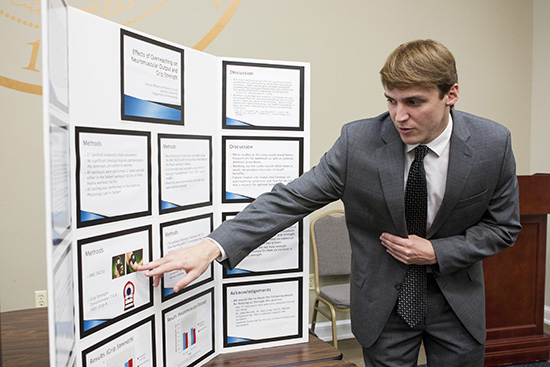 Want to explore why people may make the moral judgments that they do?  Or why some parents value obedience over autonomy in their children? Perhaps you'd like to know the effect a winning sports program has on a college's admission application rate.

For interesting and insightful conversation on these and a host of other topics, just ask a Samford University student.

Over the last week, more than 130 Samford students have presented results of research projects during the third annual Student Showcase and Spotlight on Undergraduate Research.  During oral presentations or scholarly poster sessions, each also responded to inquisitive faculty and others who sought more details about the research process or outcomes.

The event, says Samford assistant provost Nancy C. Biggio, provides an opportunity for faculty and students to recognize the importance and value of research in the undergraduate experience.

"Because of the investment of faculty mentoring, students are better prepared for graduate school and employment through the application of classroom knowledge to outside research," Biggio said.

Some 50 researchers shared their findings in poster sessions and another 80 gave oral presentations in classroom settings April 29-May 2. Six were selected to be in the "Samford Spotlight" and share their work with a convocation audience in Reid Chapel on May 6.

Research advisor and mathematics and computer science professor Steve Donaldson noted that this year's researchers had participated in "many interesting and useful" projects.

Poole, in comparing three models of moral decision-making-Unconscious Thought, Moral Foundations and Moral Intensity, found that the latter was the best predictor of ethical decision-making.

"My results suggest that we are utilitarian in our moral judgments.  People's cognitive factors (the way they think) and trait factors (aspects of personality), did not play a role in their moral judgments in my study.  Instead, the characteristics of the dilemma itself determined how people made judgments about it," said Poole. Her sample of 80 Samford undergraduate students read and responded to a set of ethical scenarios.

Poole will present her research as a professional paper at a meeting of the American Psychological Association in August.

Bandler, who considered if religion influences the values parents hope to instill in their children, considered three hypotheses: strong religious affiliation, a belief that the Bible is the literal word of God, and regular attendance of religious services, in determining if parents are more likely to value obedience over autonomy (freedom to make their own decisions) in their children.

Her findings, based on a survey of 2,603 persons of various denominations, revealed that strong religious affiliation is not as significant as the two latter hypotheses.

Acknowledging the difficulty even for Christians to always know how to respond to human suffering, McConnell said that science provides an insightful resource into explaining why a loving and powerful God might allow suffering. She suggested that theories such as evolution can enhance one's perception about the possible roles of chance and suffering in human lives.

"Christians can use evolution to gain insight into why a powerful, loving God would allow suffering.  A theodicy of chance reveals God's purpose to have a loving redeeming relationship with us, His creation," she said.

McConnell's paper won an international essay contest sponsored by the Science and Religion Forum, resulting in a trip for her to attend the conference in the United Kingdom last September.

Spotlight poster presenters were kinesiology majors Heather Chambers and Kayla Turner, who researched how handlebar assistance affects caloric expenditure while walking on an incline treadmill; kinesiology majors Natalie Newman and Jamey Webb, who explored the effect of time of day on exercise performance; and nutrition and dietetics majors Michelle Hancock and Katie McCreless, who studied the effects of Chia seeds as a fat replacement in muffins.

Newman and Webb concluded that the time of day one exercise does have an effect, but to what degree depends on the individual.

Chambers and Turner concluded that using a handlebar while walking on a incline decreases a person's caloric expenditure significantly. "More than you would expect," they say.

Persons wanting to add some Omega 3 fatty acids to their diet, reduce inflammation and lower their risk for chronic conditions, such as heart disease, can look to the Chia seed. Hancock and McCreless concluded that a mixture of 1 tablespoon Chia seeds to 9 tablespoons water is a good replacement for half the fat in a muffin recipe.

And what about sports and college applications?  Sports administration major Fabian Truss surveyed 120 NCAA  schools with football, basketball and baseball programs. He found that when all three sports achieved a certain "threshold," as defined by winning seasons, the school experienced an increase in admission applications.

"The data showed that when a school has athletic success, it leads to an increase in applications, which could in turn lead to increased revenue for the university," said Truss, citing Clemson University, which in 2009-10 saw an increase of 1,778 applications over the previous year.  At $70 per application, that resulted in an extra $124,460 in revenue.

Truss, a business minor who shared his findings in a poster presentation on April 29, said he would like to conduct more research using additional variables, such as the applicant's attraction to the school for academic, location or other reasons.