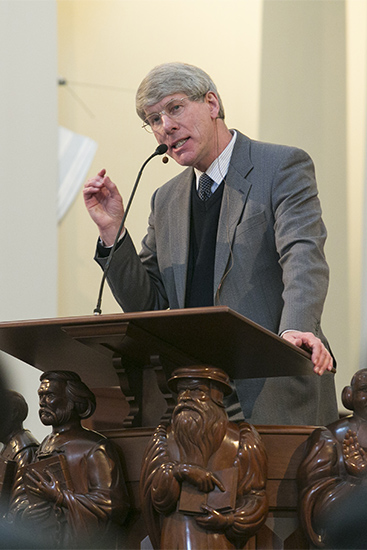 Tiny starts can lead to big ventures in advancing the kingdom of God, guest lecturer and preacher David W. Bebbington said at Samford University during a series of talks Feb. 24-27.

Bebbington, professor of history at the University of Stirling in Scotland, spoke as this year’s William E. Conger, Jr., lecturer on Biblical preaching.

In a community worship for students at Samford’s Beeson Divinity School on Feb. 24, Bebbington used the example of the tiny mustard seed as referenced in Luke 13: 18-19 to illustrate how Jesus taught.

The passage that begins with a question—“What is the kingdom of God like?—also incorporates comparisons and metaphors as well as references to purpose, growth and outcome, Bebbington said.

Jesus says the kingdom is like a tiny seed with potential, and under the rule of God, tiny things can have great potential, he said.

“Even a poor servant can plant a seed in someone’s mind that can result in a great idea or action,” said Bebbington, adding that a small gesture like a smile can have a great impact on someone’s day.   “Christians should be sowing that type of seed constantly.”

Just as a seed must be planted with intention in order to grow strong, Christians need to be prepared to sacrifice and engage with the world if the kingdom is to grow. “We ought to be holy and be in the world, and be intentional about both,” he said.

The outcome is that a tiny mustard seed can produce a tree strong enough to support birds perched in its branches.  Likewise, different peoples find shelter in the kingdom of God, which embraces all nations.

“The outcome is immense. The blessing of God’s rule is widespread,” said Bebbington, who is widely known for his definition of evangelicalism, referred to as the “Bebbington quadrilateral,” and first noted in his 1989 study, Evangelicalism in Modern Britain: A History from the 1730s to the 1980s.

Bebbington continued the theme of small starts when he described the work of 18th century Baptist missionary William Carey in a lecture to an audience of mostly undergraduates on Feb. 27.

Carey, he said, is a good example of how a small start resulted in the gospel being planted in many lands.

Impacted by the evangelical revival and Christian enlightenment of his time, and feeling it “right to spread the gospel to the world,” Carey helped found the Baptist Missionary Society in 1792.

His first mission venture was to India, where he adopted a strategy that included preaching to ordinary people in their vernacular language, founding schools that were designed for the masses, and translating scriptures and other materials into language the people could understand.

“His patience was huge. He had no convert for seven years,” Bebbington told his audience, which included students in Baptist history and Christian theology classes. But gradually, the gospel spread through local converts, he said.

Carey used his hobby of botany to his advantage when in 1814 he produced editions of a work by a respected expert botanist.

“His interest in local flora provided a point of contact with the people, and gave him a standing with the intelligentsia in Britain,” said Bebbington. “He was an all-around figure with wide appeal.”

Carey’s life in India was not without difficulty.  Family health issues, India’s caste system, heresy committed by an associate and a split among BMS leaders in London were all challenges to overcome.

However, Carey’s efforts produced far reaching results.  His work lay the foundation for the formation of other missionary societies in various lands, including America, and inspired individuals such as 19th century American missionary Adoniram Judson, who served 40 years in Burma.

“All took Carey as their model,” Bebbington said. His work was “an astonishing achievement of spreading word of the light of the world.”

Bebbington also gave two other lectures on the theme, “Preaching in the Evangelical Tradition,” during the Conger lecture series.