Harry B. Brock, Jr.: A Legend in Banking and Business Education 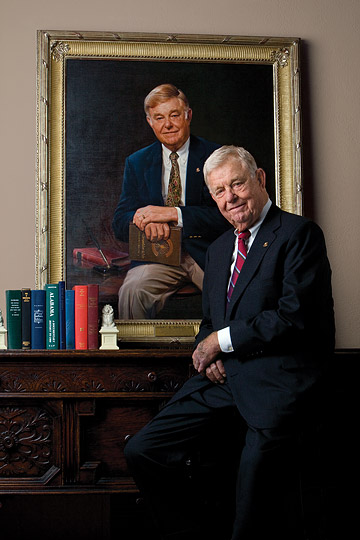 Harry B. Brock, Jr., was a giant of the banking industry and stalwart trustee of Samford University for more than 50 years.  He transformed the structure of the banking industry in Alabama in the early 1970s, spearheading a multi-bank holding company concept that laid the foundation for Birmingham to become a major regional banking center.  And over the years he provided leadership and financial support to Samford as a trustee and champion of its business school.

Mr. Brock and a group of his friends opened the first new bank in Birmingham in 18 years on March 2, 1964.  From that beginning, he brought Central Bank and State National Bank of Alabama together to form a registered bank holding company.  As more banks joined the Central family, the name changed to Central Bancshares of the South, Inc.  Brock was instrumental in the passage of the Statewide Bank Merger bill in 1980, allowing branching across county lines.  With this development, Brock could merge his banks into one bank with branches throughout the state.

Brock gave unstintingly of his time and resources to charitable and civic organizations.  No organization benefited more from these endeavors than Samford University.  Brock was named to the Samford Board of Trustees in 1962.  He served for 53 years, including four years (1985-1989) as chairman.  He was elected a Life Trustee in 1992.

Brock had a particular interest in business education and the Samford business school.  “My desire and vision for the School of Business is to be a little different and to find a niche that will help these young people fulfill their dreams,” he said in 2007.  The business school was renamed for the legendary banking pioneer that year, becoming the Brock School of Business.  Brock made a personal commitment to help the school build its endowment.

The Brock School of Business has put together an impressive array of accomplishments.  It earned full reaccreditation by AACSB International in 2010, a recognition earned by less than five percent of business schools worldwide.  (It was first accredited in 1999.)  Also in 2010, the U. S. Association for Small Business and Entrepreneurship named Brock School of Business the best new entrepreneurship program in the nation, a distinction that Brock especially applauded.

Harry Brock died at the age of 89 on July 29.  His death came almost on the eve of the opening of a grand new home for the Brock School of Business.  Classes will commence in the $25 million structure August 17.  Brock was proud of the building he helped build, but even prouder of the innovative and forward-looking approach to business education that the building represents.

“For those of you who have been around Samford for several years, you are aware of Mr. Brock’s legendary efforts to lend support to this institution,” said Samford President Andrew Westmoreland.  “While he wasn’t a Samford graduate, he adopted this place as his own and thousands of individuals have benefited as a result. We join our hearts in prayer this morning for Mrs. Brock and for the entire family.”