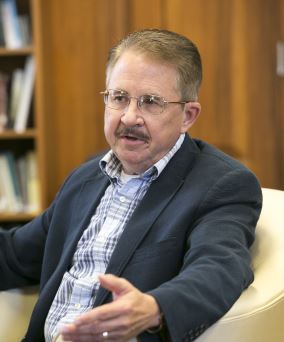 When theologian Roger Olson identifies himself as an “evangelical,” he is referring to an alignment with a particular Christian ethos and not a movement.

“My own judgment as a theological historian is that the American evangelical movement is either dead or hopelessly divided, but the spiritual theological ethos I call evangelical is still alive and well,” Olson said, speaking to a student convocation at Samford University Thursday, Oct. 8.

Olson, Foy Valentine Professor of Christian Theology and Ethics at Baylor University’s Truett Theological Seminary, spoke as this year’s Holley-Hull lecturer at Samford. His topic was “Why I Still Call Myself ‘Evangelical’ in Spite of Everything.”

Olson explained that he still calls himself “evangelical” despite a perceived lack of fit between his theological orientation and spirituality and the popular image of an evangelical.

“Somehow, evangelical has come to be closely associated in the popular mind with an ultra-conservative approach to Christianity, one that is harshly judgmental, narrow-minded, inseparably related to conservative politics and backward-looking rather than progressive,” Olson said.

“It isn’t I who have changed; it is American evangelicalism that has changed and I’m just too stubborn to give up a label I’ve used for my particular Christian identity my whole life,” said Olson, whose father was an evangelical preacher for more than 50 years.

The evangelical movement as a cohesive coalition has dissolved into competing parties, each with its own expression of the evangelical ethos, said Olson. Its last gasps, he believes, were in the 1990s as it divided over politics, biblical inerrancy, roles of women in church and family and other issues.

A “combustible compound” from the beginning, the movement held within it the seeds of its own destruction, he said. “Especially its tendency to identify with Americanism and its obsession with opposing liberalism in every form.”

While the evangelical movement of his youth has dissipated in multiple controversies and the label ‘evangelical’ has lost much of its meaning, the original evangelical ethos that once energized the movement, unified it and served as its living center is alive and well, he said.

Olson cited four hallmarks of “authentic evangelical ethos” as identified by scholars David Bebbington and Mark Noll: biblicism, a general regard for scripture as the uniquely inspired, written Word of God; conversionism, which authentic Christianity always includes; crucicentrism, cross-centered proclamation and devotion; and activism in missions, evangelism and social transformation.

Olson suggested a fifth hallmark:  respect for the great tradition of Christian orthodoxy, especially as interpreted by the Reformation.

The ethos marked by these five common features, or “family resemblances, is alive and well and constitute his particular brand of evangelicalism, said Olson.

Unfortunately, Olson said, many who share it tend to emphasize and underscore their differences about details.

“We need to value our particularities without beating each up over them, put truly secondary doctrinal, moral and ethical issues on the back burner, rediscover our spiritual heritage of Jesus-centered piety closely related to generous Christian orthodoxy, recover from paranoia toward science and culture, and shed every hint of judgmental triumphalism,” Olson said.

“Only when we think there is such a thing as the evangelical movement, does diversity among evangelicals cause consternation and confusion among us,” he said.

“Once we’ve disabused ourselves of that notion, perhaps we can get on with the business of being evangelicals in our own, distinct ways and accept others as equally evangelical without trying to make them conform to some stereotype of our own imagination and our own invention,” Olson concluded.

While at Samford, Olson also met with a group of University Fellows and was part of a Faculty Shop Talk.

Olson holds degrees from Rice University, North American Baptist Seminary and Open Bible College.  His books include The Story of Christian Theology: Twenty Centuries of Tradition and Reform, and Who Needs Theology? With Stanley J. Grenz.