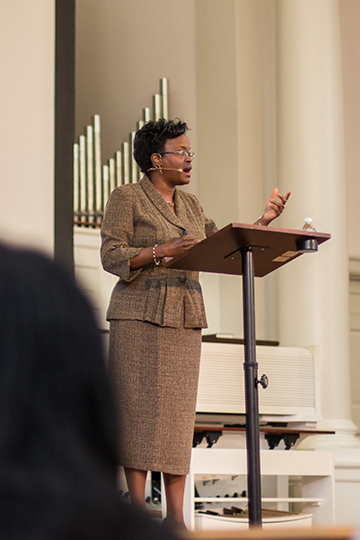 Barnes defined social justice not just as a creating “fair relations between people and society” but also as a moral edict.

“Social justice,” Barnes said, “is an ideological conviction. We live in a society that condones social injustice.” Her alternative to this was a community working toward a realistic utopia.

To illustrate her point, she discussed the issues of economic inequality, sexism and racism. She noted, however, that there is a “new face” of social injustice that manifests as micro-aggressions. Cyber aggression, she said, is a new injustice because it’s no longer physical but virtual. To make it worse, we carry around the source of abuse on us in the form of our cell phones, and the anonymity of the Internet only increases aggression.

In the face of social injustice, Barnes encouraged students to develop strategic solutions to ending these issues, such as finding opportunities for more inclusivism, challenging groupthink and teaching digital etiquette. We have to put the “we” back in community and focus on others. This, Barnes said, was the only way to create bridges between one another.

Barnes closed by challenging students to “carve out a little of your time to be a servant leader.”

Aly Hathcock is a journalism and mass communication major and a news and feature writer in the Division of Marketing and Communication.