Changing of the Bard: ‘A Midsummer Night’s Dream,’ Then and Now 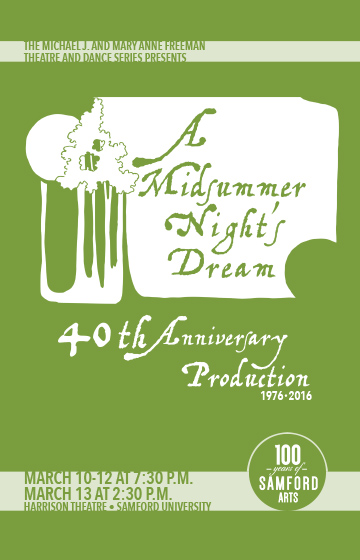 On March 12, 1976, Samford University’s Harrison Theatre opened for the first time with a production of A Midsummer Night’s Dream. Forty years later, almost to the day, Theseus, Hippolyta and their entourage of Athenian lovers and forest fairies will inhabit the same stage for Shakespeare’s classic comedy.

Some elements of the production will look familiar to those who attended the first production, including the set design by Samford theatre professor Eric Olson.

“We were coming up on the 40th anniversary, and as things would happen, Eric, our longtime brilliant designer, announced that he’s retiring,” said Don Sandley, chair of theatre and dance in Samford’s School of the Arts. “We decided we have got to celebrate this anniversary. Eric is paying homage to his original design for this particular production, and we’ve invited back original cast members to see it.”

A Midsummer Night’s Dream requires a large cast. “In those days, there were not that many theatre majors,” Sandley said. “It was a fledgling department. Most of the people in it were not theatre majors at all. They were journalism or music or history majors.”

Samford’s theatre program has taken on new life and crossed new horizons in those decades.

“This cast is — all but one— theatre majors,” Sandley said. “It’s a testament to the program’s growth and all that has happened to us.”

Directed by Associate Professor Mark Castle, the show opens Thursday, March 10, at 7:30 p.m., and repeats on March 11–12 at 7:30 p.m. and Sunday, March 13, at 2:30 p.m. One of five presentations this season in the Michael J. and Mary Anne Freeman Theatre and Dance Series, it represents the solid theatrical foundation students receive at Samford.

“We do a classic piece every other year,” said Sandley. “We also do the Greeks, other Elizabethans and Restoration Theatre. We work heavily in the classics because it’s such an important part of students’ training. If you can do Shakespeare, you can do most anything.”

Sandley is planning a question-and-answer period with the original cast invitees after the Saturday show, including retired faculty member Harold Hunt, who directed the 1976 production.

“It has been exciting to relive the history of this wonderful theatre, and how the program has grown over the years and developed a national reputation,” said Sandley.

Michael Huebner covers Samford Arts for the Division of Marketing and Communication.