Nutrition and Dietetics Chair Studies Possible Use of Basil Against Diabetes 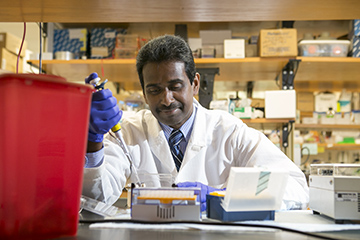 Suresh Mathews, professor and chair of Samford’s Department of Nutrition and Dietetics, is part of a team of researchers awarded a prestigious grant to study basil as a potential weapon against diabetes.

The $493,892 grant from the USDA National Institute of Food and Agriculture will fund a three-year study of the antidiabetic effects of basil.

Some basil varieties already have been found to lower blood glucose concentrations in laboratory animals. But researchers have not identified the chemicals in basil that produce the positive effects nor determined how these compounds work to reduce blood sugar.

Mathews’ study will use a combination of cellular, molecular, physiological and animal studies to evaluate the antidiabetic effects of six species of basil, as well as to identify the bioactive compounds and mode of action.

Although oral medications and insulin are effective in treating diabetes, Mathews said there is a growing interest in alternative and complementary therapies for managing the disease, which affects 347 million people worldwide, including 29 million Americans.

“In Europe and Asia, complementary medicine is quite popular,” he said. “In the U.S., it’s a growing field, and there is more interest in looking at herbals and bioactives that may have potential for managing chronic pain, diabetes and other illnesses.”

Mathews points out that similar research led to some standard diabetes therapies in use today.

“The discovery and synthesis of the widely popular antidiabetic medication Metformin (Glucophage) can be attributed to early findings of blood glucose-lowering properties in French lilac plant extracts,” Mathews said.

The benefits of the basil research could go beyond the medicinal, he said.

Among the varieties to be studied is sweet basil, which is commonly found in gardens and used in kitchens across the country. But other varieties that will be studied — including clove basil, hoary basil and holy basil — could prove more useful in combating diabetes. If that happens, farmers could have a new opportunity for a lucrative cash crop.

In fact, one goal of the research is to develop sustainable organic production practices for commercial cultivation of the selected varieties of basil.

Also participating in the research are Dr. Rao Mentreddy, professor in the Department of Biological Sciences at Alabama A&M University, and Dr. Agnes Rimando of the USDA’s Agricultural Research Service.

“I’m really excited about this group. It involves a partnership with three institutions, and because of that partnership, we can do so much more,” Mathews said. “I’m also excited because we can incorporate this into the curriculum and involve our graduate and undergraduate students, who really want to do this kind of research.”