96 Percent of Samford Graduates Employed or in Graduate Study

Published on January 18, 2017 by William Nunnelley   Share this on: 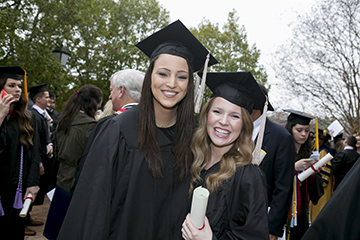 Samford University graduated 593 undergraduate students in May 2016, sending those graduates out to make a difference in the world. What are these students doing with their hard-earned diplomas?

Within six months of graduation, 96 percent of the graduates are either employed, or are continuing their education in postgraduate school or with postgraduate internships.

Of these graduates, 53 percent were employed as of Nov. 16. Another 43 percent of this group were continuing their education in postgraduate school or with internships. The remaining four percent were seeking employment.

“This is a very high rate of response to the First Destination survey, particularly since the survey is all voluntary,” said Dora Ditchfield, Career Development Center director. “These statistics are certainly indicative of the outstanding value of a Samford degree.”

Ditchfield noted that the center began collecting the data annually in 2011 and continually has very high placement rates.

“While we are very pleased to have this information to share with our community, the process of collecting this information is even more important because it allows our Career Development Center to remind our most recent alumni that we remain committed to helping them take their next step,” said Nancy Biggio, associate provost for administration.